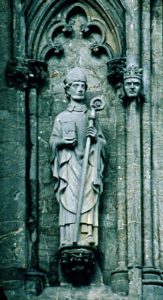 Swithun or Swithin (d. 862) was an obscure bishop of Winchester in the mid-9th century. However, after his death he seems to have been quite active in the miracle department. On his deathbed, Swithun asked to be buried out of doors, where he would be trodden on by local folk and rained on. However, when the monks of Winchester attempted to remove his remains to a splendid shrine inside the cathedral legend says there was a heavy rain storm during the ceremony.

This led to the belief that if it rains on St Swithin’s Day (July 15th), it will rain for the next 40 days in succession, and a fine 15th July will be followed by 40 days of fine weather. The old rhyme says:

For forty days it will remain.

St. Swithin’s day if thou be fair

A local variation says: If on St Swithun’s day it really pours/ You’re better off to stay indoors.

Unfortunately for the wisdom of our ancestors, this seems not to be borne out in fact. Since records began, not a single 40-day drought has occurred anywhere in the UK during the summer months, and there has been not one instance at any time of the year of 40 consecutive days of rainfall. According to the British Meteorological Society “the middle of July tends to be around the time that the jet stream settles into a relatively consistent pattern. If the jet stream lies north of the UK throughout the summer, continental high pressure is able to move in, bringing warmth and sunshine. If it sticks further south, Arctic air and Atlantic weather systems are likely to predominate, bringing colder, wetter weather.” The rhyme should read:

For forty days, relatively unsettled there’s a fair chance it will remain

St Swithun’s day if thou be fair

For forty days, a northerly jet stream might result in some fairly decent spells