Agitation for a Second Front

When, in August 1939, the USSR and Nazi Germany signed the Molotov-Ribbentrop pact, agreeing to a 10-year peace, Communists in the West were startled. They were no longer to say bad things about Hitler and, in the next month, when the invasion of Poland by the armies of both Hitler and Stalin started World War Two, party loyalists were instructed to oppose, sabotage, and obstruct the military efforts of Britain and France. In the United States, leftists such as Peter Seeger and Woody Guthrie, urged America to stay out of the conflict, calling President Roosevelt a war-monger.

Things changed in the summer of 1941 when Germany broke the pact and invaded the Soviet Union. Communists in the UK and USA now enthusiastically backed the war effort and soon began to clamour for a “Second Front in Europe” to ease the pressure on the Red Army. When this failed to take shape soon enough, leftists claimed that the capitalist West was happy to see the USSR suffer horrific losses. 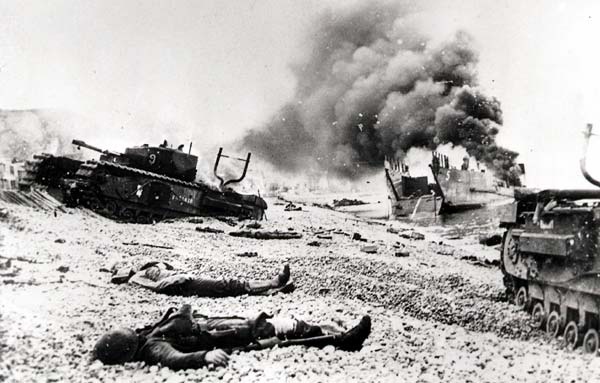 The failure of the Dieppe raid in 1942, where the largely Canadian invading force was pinned down and butchered scarcely having got off the beaches, convinced planners that taking a port was not the way to go. Amphibious attacks were undertaken in North Africa, Sicily, and Italy, with mixed results and many lessons learned. It was not until June 1944 that the western Allies felt ready to launch Operation Overland and land on five Normandy beaches.

The call for a “Second Front” was always a code phrase for “more help for Russia.” Britain was fighting on a number of fronts in the North Atlantic, the Mediterranean, Asia, and in the air over Germany, and when the USA joined they too waged war from Alaska to New Guinea in the Pacific and in Europe.