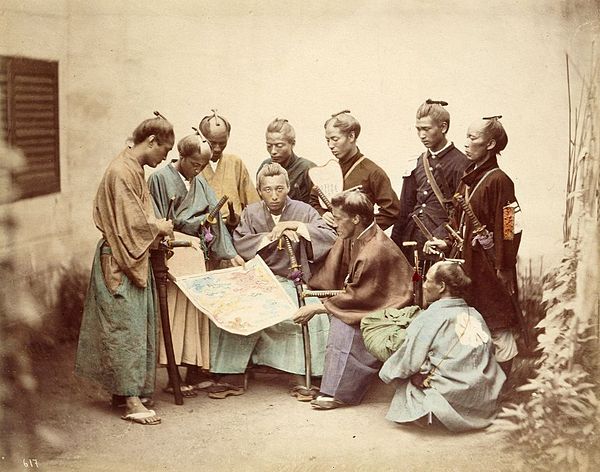 For centuries the Japanese emperors had been puppet rulers, subject to the oversight of a series of warlords. Since the 1630s these shoguns had been drawn from the Tokugawa dynasty which had followed a policy of isolating Japan from the rest of the world. With the exception of a few Dutch ships allowed to trade at Nagasaki, it was the death penalty for attempting to enter, or leave, the country.

In 1854 an American fleet under Commodore Perry forced Japan to open up to trade with the West. The realization that Europeans and Americans had a vast military and technological advantage over Japan, and the chaotic experience that China was undergoing at the hands of westerners, led elements inside the government to press for an end to the shogunate and a program of modernization.

On this date in 1868 the Meiji Emperor announced that he was resuming power:

The Emperor of Japan announces to the sovereigns of all foreign countries and to their subjects that permission has been granted to the Shogun Tokugawa Yoshinobu to return the governing power in accordance with his own request. We shall henceforward exercise supreme authority in all the internal and external affairs of the country. Consequently the title of Emperor must be substituted for that of Taikun, in which the treaties have been made. Officers are being appointed by us to the conduct of foreign affairs. It is desirable that the representatives of the treaty powers recognize this announcement.

A brief civil war against traditionalists was necessary to achieve the emperor’s victory but Japan was soon on the way to modernization and world power status.