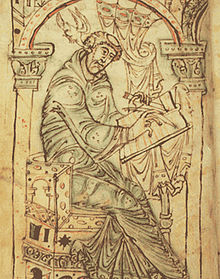 Gregory the Great is elected pope.

It would be hard to name a more influential pope of the early Middle Ages than St. Gregory I (540-604), called the Great. (Supporters of the claim of Leo I, also the Great and also a saint, may send their arguments on a postcard to St Margaret’s Church, Winnipeg.) Born into a wealthy Roman family with a pope and many high-ranking officials on his family tree, he was superbly educated in the liberal arts and entered at an early age into political life, becoming Prefect of Rome (the highest rank in the city) by his early 30s. He took office at a miserable time in the history of Rome with Italy ravaged by the barbarian Lombards and still recovering from the depopulation and chaos caused by the Byzantine attempt at reconquest and the plague.

On the death of his father he converted his family villa into a monastery and became a monk, soon rising in influence in the Church. In 579 he was chosen by the pope to lead an embassy to the emperor in Constantinople to whom Rome still owed allegiance. His attempt to convince the emperor to send troops to Italy to stop the Lombard advance was fruitless.

In 590, much against his will, he was elected Pope to replace Pelagius II who died of the plague. He took on this task with great energy and succeeded by the time of his death 14 years later in elevating the status and reach of the Roman papacy. For the previous century the bishops of Rome had had little positive influence on the lands of the western empire which had been lost to the Germanic invaders. Britain had lost contact with civilization for almost a century; Spain was dominated by Arian heretics; and the Church in Gaul was in the hands of the Frankish landowners who had little thought for evangelism. Under Gregory the papacy reached out to assert the international leadership of the Bishop of Rome once more. One of his great achievements was sending the mission of Augustine, a monk from his own monastery, to England to spread Christianity to the German tribes there. He reformed the liturgy and encouraged the music we now call Gregorian chant. He reformed the management of church lands which came to provide food and revenue for the poor of Rome. His book Pastoral Care was translated by Alfred the Great into English and was one of the civilizing books every church had to have a copy of.