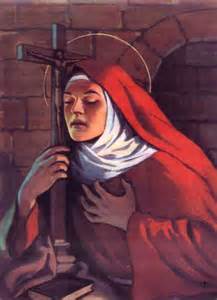 How does one get to be the patron saint of hoboes, the homeless, the mentally ill, the falsely accused, midwives, reformed prostitutes, penitent women, unmarried women and those ridiculed for their piety, as well as the saint to be called up on by those suffering sexual temptation? The life of St Margaret of Cortona will tell you.

Margaret (1247-1297) was an attractive young Italian woman who ran off with a lover and bore his child. When he was murdered she had a crisis of conscience and tried to return to a decent life but was rebuffed by her family. She joined an order of Franciscan nuns and spent the rest of her life in service to the sick. She was a mystic who communed with the spirit of Jesus, as well as a founder of hospitals and an order of women dedicated to helping the poor. Despite her piety, she was always dogged by the memory of her earlier unsanctified way of life.