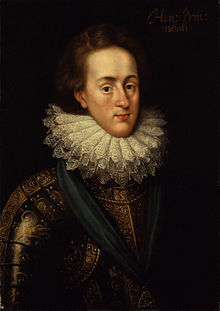 1594 Birth of Henry Prince of Wales

Henry Frederick Stuart was the oldest son of King James VI of Scotland who in 1603 became James I of England. His death in 1612 left second son Charles as the heir. It was the fate of Charles to prompt the English Civil War and be executed for  treason in 1649, prompting the founding of an English republic. Chambers in his Book of Days laments the death by typhoid of Henry and the course that English history might have taken:

It is blessed to die in promise, rather than after all the blots and mischances of performance. We naturally credit the young dead with much which might never have been realized. Nevertheless, in the early death of Henry Prince of Wales there is no room to doubt that the national bewailment was just. All accounts concur in representing him as a youth of bright talents, most generous dispositions, and the noblest aspirations. At sixteen, he had the figure, the proportions, and the sentiments of a full-grown man. With the love of study which belonged to his father, he possessed what his father entirely lacked, a love of manly military exercises. In riding, in archery, in the use of arms, he was without a superior. He studied shipbuilding and the whole art of war with as much zeal as if he had had no taste for elegant learning. When, at Christmas 1609, the romantic spectacle called his Barriers was presented in the Banqueting House at Whitehall,—when he and six other youths met each in succession eight others, at pike and sword play,—all clad in the beautiful armour of the period,—Henry was remarked, to the surprise of all, to have given and received thirty-two pushes of pike and about three hundred and sixty strokes of sword, in one evening.

It was in the midst of active study and exercise, and while the nation was becoming fully aware of the promise he gave as their future ruler, that this accomplished prince was seized with a fever, the consequence, apparently, of the too violent fatigues to which he occasionally subjected himself. What immediately affected him to a fatal illness, seems to have been his playing at tennis one evening without his coat. In the simple act of stripping off and laying aside that coat, was involved an incalculable change of the current of English history; for, had Henry survived and reigned, the country would probably have escaped a civil war—and who can say, in that event, how much our national destinies might have been changed, for good or evil? During the twelve days of the prince’s illness, the public mind was wrought up to a pitch of intense anxiety regarding him: and when, on one occasion, he was thought to have yielded up the ghost, the cry of grief went out from St. James’s Palace into the street, and was there repeated and spread by the sympathising multitude. All that the medical skill of that age could do was done to save so valuable a life, including some applications that sound strangely in our ears: for example, pigeons applied to the head, and a split cock to the feet. Sir Walter Raleigh sent from his prison in the Tower a ‘quinteseence’ which he believed to be of wonderful power: and it did give the prince the only approach to a restoring perspiration which he had had. But all was in vain. Henry died on the 6th of November 1612, when three months less than nineteen years of age. As a historical event, his death ranks with a very small class in which deceased royalty has been mourned by the nation’s heart.

The national admiration of this young prince is shown in some quaint lines, hitherto inedited, in the Burleigh MSS.:

Loa where he shineth yonder,
A fixed star in heaven:
Whose motion heere came under
None of your planets heaven.
if that the moone should tender
The sunne her love, and marry,
They both would not engender
Soe great a star as Harry.

One thought on “February 19”