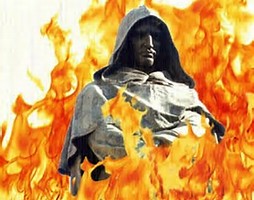 1600 The burning of Giordano Bruno

Giordano Bruno (1548-1600) was a multifaceted genius unfortunate enough to be born in the age of the Inquisition and foolish enough to be careless in his utterances.

Born in southern Italy he joined the Dominican order and became a priest in 1572. He achieved fame as a scholar, particularly in the arts of memory at a time when studies in classical mnemonics were being revived in Renaissance. His unorthodox dabbling (he mused on Arianism and Erasmus) came to the attention of the authorities and he fled north, wandering to Naples, Genoa, Venice and for a time in Calvinist Geneva, though he seems not to have found Protestantism to his liking. Moving to France, he took his doctorate in theology at Toulouse and then moved to Paris where he dazzled the French court with his mastery of memory. He found powerful patrons there and in England but the unorthodoxy of his ideas was always peeping through. He championed Copernican theory before its wide acceptance and his attacks on Aristotle were not always well received, causing him to move about Europe from one teaching post to another. He had a great gift for making enemies out of friends.

In 1592 he was denounced to the Venetian Inquisition and he spent the last seven years of his life in jail defending his positions. Aside from his offensive cosmography — he suggested that there were multiple worlds in space where other life-forms might exist — he was deemed to have advanced heretical ideas on the Trinity, the Incarnation, the nature of the Eucharist, the transmigration of souls and the Catholic Church. He was found guilty and burnt at the stake in Rome’s Campo di’ Fiori where a statue to him now stands.

In modern times Bruno has been hailed as a martyr of science at the hands of an obscurantist church but it seems that he was most likely executed for his pantheism rather than his ideas on planetary forms.