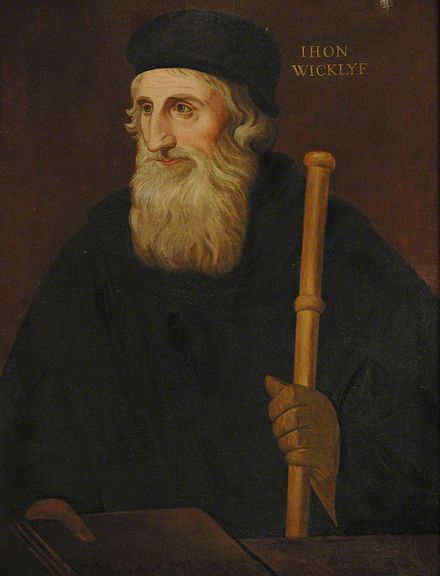 The death of John Wyclif. John Wyclif (or Wycliffe) was an English priest born c. 1320, a profound critic of the 14th-century Church and the leader of a heresy that came to be known as Lollardy.

The Catholic Church was languishing in one of its worst ebbs during the 1300s. The papacy was a puppet of the French monarchy and had moved from Rome to Avignon in what was known as the Babylonian Captivity. The popes could not protect the Templar Knights from the depredations of the French kings; they quarrelled with the popular Franciscan order; they could do nothing to halt the ravages of the Hundred Years War; and were helpless in the face of natural disasters such as the onset of the Little Ice Age and the Black Death. The low regard in which the Church was held sank to even further depths when rival popes multiplied in the Western Schism, producing two, three and even four claimants to the Throne of St Peter. Out of this morass rose a number of heresies, the most of these being led by Wyclif.

As an Oxford priest and doctor of theology, Wyclif developed a powerful list of indictments against the Church as he saw it. He denied the doctrine of transubstantiation; claimed the true church was not the contemporary Catholic Church but an invisible body of believers; asserted a strong view of predestination; demanded scripture in the common language; criticized the wealth of the clergy; denied the power of excommunication; called for the abolition of the monastic orders; and, worst of all, advanced a novel theory of dominion, claiming that those in a state of sin could not be authentic rulers — thus if priests were bad men and not in the state of grace they could not rightfully possess spiritual lordship and laymen may justly deprive them of their property.

The Church could not sit still when Wyclif stated that the true church was not the visible institution but the “totality of those who are predestinate”, dead, alive or yet to be born. The pope then was not the head of the true church. At best he headed only the western European branch of the church on earth. At worst a pope who was not predestined might not even be a member of the true church. To the English government, Wyclif’s words were a potential weapon against proud prelates and so the priest was protected from Church prosecution while alive. The Council of Constance in 1415 condemned the Lollard heresy and the version of it that had spread into the Czech lands where it had been taken up by Jan Hus (or John Huss). Hus was burnt at the stake while Wyclif’s remains were dug up, burnt and thrown into a river.

Wycliff has rightly been called the “morning star of the Reformation” and though Lollardy was forced underground in England, most of Wyclif’s ideas re-emerged triumphantly in the 16th century.