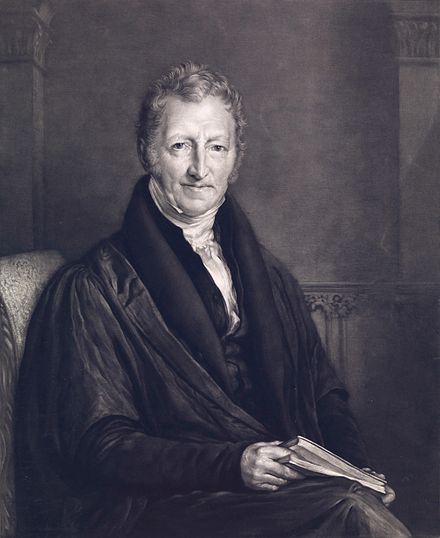 The death of Thomas Malthus

Thomas Malthus (1766-1834) was an English clergyman and political scientist whose theories still generate controversy today. The following is a 19th-century reflection on his life:

This celebrated writer, whose theory on population has been the subject of so much unmerited abuse, was the son of a gentleman of independent fortune, who possessed a small estate in the county of Surrey. Young Malthus received his early education mainly from a private tutor, and subsequently entered Jesus’ College, Cambridge, where he studied for the church, and obtained a fellow-ship in 1797. For a time, he held the incumbency of a small parish in Surrey near his native place.

It was not in the church, however, that Mr. Malthus was to become famous. Through life, the bent of his genius seems to have led him in the direction of political economy and statistics; and in pursuit of information on this subject, he made extensive journeys and inquiries through various countries of Europe. The first edition of the work, which has conferred on him such notoriety, appeared in 1798, under the title of An Essay on the Principle of Population, as it affects the Future Improvement of Society, with Remarks on the Speculations of Mr. Godwin, M. Condorcet, and other Writers. In subsequent issues, the title of the work was changed to its present form: An Essay on the Principle of Population; or a View of its Past and Present Effects on Human Happiness, with an Inquiry into our Prospects respecting the Future Removal or Mitigation of the Evils which it occasions.

The leading principle in this work is, that population, when unchecked, doubles itself at the end of every period of twenty-five years, and thus increases, in a geometrical progression, or the ratio of 1, 2, 4, 8, 16, 32; whilst the means of subsistence increases only, in an arithmetical progression, or the ratio of 1, 2, 3, 4, 5, 6. The author discusses the question of the various restrictions, physical and moral, which tend to keep population from increasing, and thus prevent it outstripping the means of subsistence in the race of life. A misapprehension of the writer’s views, combined with his apparent tendency to pessimism in the regarding of misery and suffering as the normal condition of humanity, has contributed, notwithstanding the philosophical soundness of many of his theories, to invest the name of Malthus with much opprobrium.

When the common or vulgar impression regarding Mr. Malthus’s celebrated essay is considered, it is surprising to find that the man was one of the most humane and amiable of mortals. His biographer tells us, it would be difficult to overestimate the beauty of his private life and character. His life was:

‘a perpetual flow of enlightened benevolence, contentment, and peace;’ ‘his temper mild and placid, his allowances for others large and considerate, his desires moderate, and his command over his own passions complete.’ ‘No unkind or uncharitable expression respecting any one, either present or absent, ever fell from his lips All the members of his family loved and honoured him; his servants lived with him till their marriage or settlement in life; and the humble and poor within his influence always found him disposed, not only to assist and improve them, but to treat them with kindness and respect’ ‘To his intimate friends, his loss can rarely, if ever, be supplied; there was in him a union of truth, judgment, and warmth of heart, which at once invited confidence, and set at nought all fear of being ridiculed or betrayed. You were always sure of his sympathy; and wherever the case allowed it, his assistance was as prompt and effective as his advice was sound and good.’

Shortly after his marriage in 1805 to Miss Eckersall, Mr. Malthus was appointed professor of modern history and political economy at the East India College at Haileybury, and held this office till his death. He expired on 29th December 1834, at Bath, at the age of sixty-eight, leaving behind him a son and daughter.