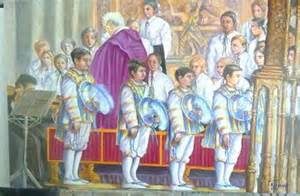 Judging by the numerous prohibitions issued against it by Church authorities through the centuries, people have wanted to dance to celebrate Christmas for a long time. Dancing in churches was prohibited by the Council at Toledo in 590; in 692 another council in Byzantium warned against dancing during the Twelve Nights as did the Faculty of Theology in Paris in 1445 — in both cases they linked dancing to cross-dressing. In sixteenth-century Iceland, church decrees were issued against dancing on Yule Eve and in Scotland in 1574 fourteen women were arrested for “playing, dancing and singing filthy carols on Yule Day.” Despite these strictures Christmas and dancing continue to be linked.

In 1325 church authorities in Paris forbade clerics under pain of excommunication from participating in dances except at Christmas and the feasts of St Nicholas and Saint Catherine when certain round dances were part of the liturgy.

Nowadays, in Spain it is the “Dance of the Six” in the cathedral of Seville that opens the Christmas season — in front of the altar ten boys dance through a series of postures and movements that symbolize the mysteries of the Incarnation and Nativity. (In a rather less solemn manner in Cordoba, other Spaniards engage in “El Baile de los Locos”, the Dance of the Madmen. Led by El Loco Mayor, the chief madman, a mob of folk pretending to be demented dance though people’s houses during the Christmas season.) Dancing opens the Christmas season in Honduras as well — the Warini, the Christmas Herald is a masked dancer who goes house-to-house accompanied by singers and drummers. In Lalibela, Ethiopia on Christmas Day ceremonies include a dance by some of the priests who have accompanied the procession of the Coptic Ark of the Covenant. The Matachine dancers perform during Christmas in Mexico while in Canada numerous aboriginal tribes hold competitive powwows; in Tirol men dressed as bears dance in the streets while in northeastern Brazil the Bumba Meu-Boi involves dancers guised as bulls and donkeys. In Scotland “guisers” went door to door dancing at singing; in Cornwall such folk were called “geese dancers”.

In Provence, at special Christmas services to honour their profession and its connection to the original Nativity, traditionally clad shepherds and shepherdesses sing and dance behind a ram pulling a cart with a lamb. Scandinavian families link hands on Christmas Eve and dance around the tree singing carols. In the United States there are few cities without a ballet company who will performThe Nutcracker over the Christmas holidays while in the rural west of the country those with a yen to dance can attend the Texas Cowboys’ Christmas Ball or the Sheepherders’ Overall Dance.