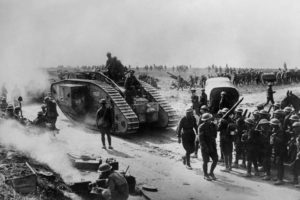 One hundred years ago, a Canadian army helped defeat the Imperial German army and forced the enemy high command to consider the war lost.

Eleven divisions — 3 British, 4 Canadian, and 4 Australian — 75,000 men, more than 500 tanks and nearly 2,000 planes attacked the Germans who had not dug in, as they expected to continue their own offensive.

The keys to the victory were surprise — troops and equipment were moved only at night and at the last minute — the use of Canadians and Australians as shock troops, and coordination of tanks, guns, and aircraft.

As the sun set on the 8th August on the battlefield the greatest defeat which the German Army had suffered since the beginning of the war was an accomplished fact.