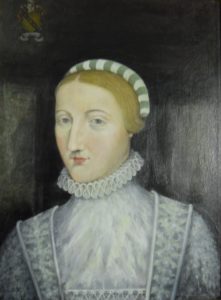 The death of Anne Hathaway

Obscure as are many of the points in Shakespeare’s life, it is known that his wife’s maiden name was Anne Hathaway, and that her father was a substantial yeoman at Shottery, near Stratford-on-Avon. Shakespeare was barely nineteen, and his bride about six-and-twenty, when they married. The marriage-bond has been brought to light, dated November 1582. Singularly little is known of their domestic life; and it is only by putting together a number of small indications that the various editors of Shakespeare’s works have arrived at any definite conclusions concerning the family. One circumstance seems rather to tell against the supposition of strong affection on his side: Shakespeare drew out his whole will without once mentioning his wife, and then put in a few words interlined. The will points out what shall be bequeathed to his daughter Judith (Mrs. Quiney), his daughter Susanna (Mrs. Hall), his sister Joan Hart, her three sons, William, and Thomas, and Michael, and a considerable number of friends and acquaintances at Stratford; but the sole mention of Anne Shakespeare is in the item: ‘I give unto my wife my second-best bed, with the furniture.’ Malone accepted this interlined bequest as a proof that Shakspeare had, in making his will, forgot his wife, and then only remembered her with what was equivalent to an insult. On the other hand, Mrs. Shakespeare would, by law, have a third part of her husband’s means; so that there was presumably the less reason to remember her with special gifts of affection. She died on the 6th of August 1623, and was buried on the 8th, in Stratford church.

Her gravestone is next to the stone with the doggrel inscription, but nearer to the north wall, upon which Shakspeare’s monument is placed. The stone has a brass-plate, with the following inscription:

‘Heere lyeth interred the body of Anne, wife of William Shakespeare, who dep.ted this Life the 6th day of Avgv. 1623, being of the age of 67 Yeares.

Translated, this reads: “Breasts, O mother, milk and life thou didst give. Woe is me – for how great a boon shall I give stones? How much rather would I pray that the good angel should move the stone so that, like Christ’s body, thine image might come forth! But my prayers are unavailing. Come quickly, Christ, that my mother, though shut within this tomb may rise again and reach the stars.”

This appears to be strong evidence of the love in which Shakspeare’s wife was regarded by her daughter, with whom she lived during her latter years.