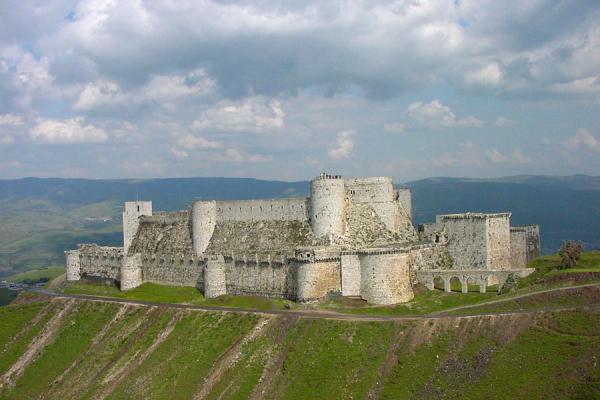 When the knights and princes of the First Crusade recaptured much of the Holy Land for Christendom in 1099, they found that it would require considerable military might to defend it. That task fell largely on members of a new kind of organization: the military monastic orders, principally the Knights Templar and the Hospitallers or the Knights of St John. Originally begun as groups dedicated to serving the sick and pilgrims, they grew in the early twelfth century into formidable armies of warrior monks. Based in fortresses in what is now Israel, Syria and Lebanon they were the backbone of the crusader kingdoms of the Levant.

The most impressive of their castles was the Hospitaller fortress of Krak, built on a hill overlooking a strategic road that connected the cities of Homs and Tripoli. Supported by donations from European Christians, loot from raiding Muslim areas, and the revenues from surrounding farms, the Knights of St John in the Krak garrison worked to erect ever more impregnable defences, manned by over 2,000 soldiers.

By the late 13th century, however, the crusader kingdoms had been reduced to a few forts and a narrow strip of the Mediterranean coast. Muslim disunity, from which the crusaders had benefited, had ended and Islamic armies under Baibars, the Mamluk Sultan of Egypt succeeded in besieging Krak in 1291. After their outer fortifications had been been breached, a letter (probably forged) reached the beleaguered garrison of 300 warriors by carrier pigeon; it purported to be from the Hospitaller Grand Master and counselled the Knights to surrender. This they did and on April 8, 1291 they turned the fortress over to the Mamluks and marched away. The fall of Krak is often held to signal the end of the era of crusader states on the eastern Mediterranean mainland.

The castle still stands and because of its commanding position is still used militarily in the ongoing Syrian Civil War.