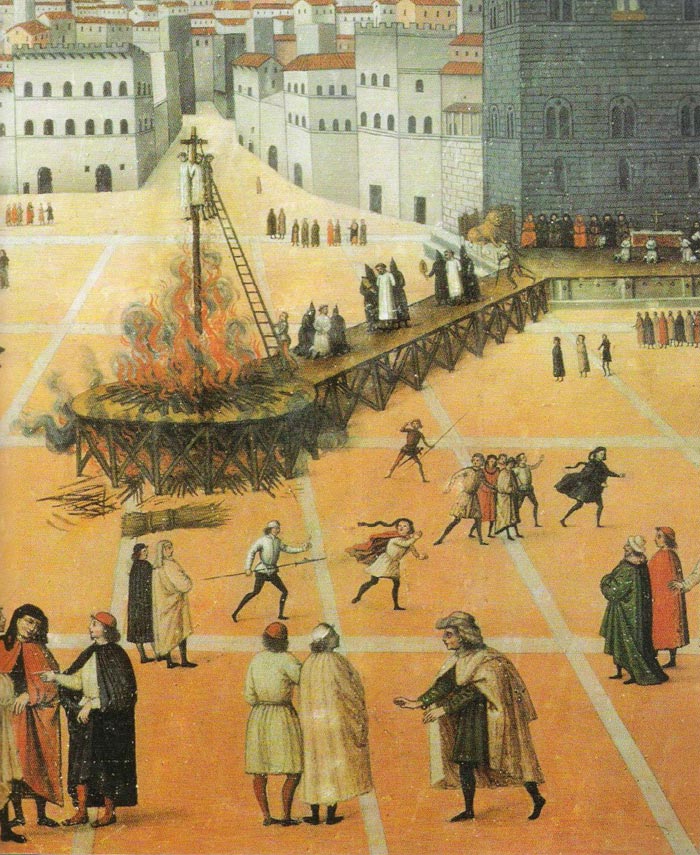 Trial by fire in Florence

Girolamo Savonarola (1452-98) was a Dominican monk whose career of outspoken criticisms of the pope, wild apocalyptic prophecies, and involvement in Florentine politics ended in a bizarre confrontation in front of a giant bonfire.

Savonarola was born in Ferrara and entered the Dominican order in 1475. An early attempt to win influence in Florence failed and he spent a number of years as an itinerant preacher before he was invited back to Florence at the behest of the humanist Pico della Mirandola. Florence was then at the height of its Renaissance glory, governed by the Medici clan and its leader Lorenzo the Magnificent who became Savonarola’s patron. The monk, however, did not feel himself bound to be a grateful supplicant of the powerful: his preaching scorched the rich and denounced the corrupt clergy. When Lorenzo lay dying in 1492 it is said that he sent for Savonarola to give him the last rites. “Will you return your ill-gotten gains and restore the liberty of Florence?” asked the Dominican. When Lorenzo refused, Savonarola left him unshriven. (Or so the story goes; other sources have Savonarola and Lorenzo reciting prayers together.)

Lorenzo’s death led to a short spell of government by his son Piero the Unfortunate who was driven from Florence in 1494 and replaced by a republic inspired by the preaching of Savonarola. For a time the monk held sway, instituting a reign of moral repression, political experimentation, and financial incompetence. When the King of France failed to fulfill some of Savonarola’s prophecies and the pope excommunicated him, his enemies inside Florence came out into the open. In 1498 one of his followers foolishly agreed to a challenge by some Franciscan monks who were fierce critics of Savonarola: which side could enter flames and emerge unscathed? Despite many misgivings Savonarola agreed to the test.

On April 7, 1498 a huge bonfire was set up in the midst of the city’s main square. The volunteers from both sides had prepared with a week of prayer and fasting. A roped-off walkway led to the pyre; three Franciscans and Savonarola with two supporters would walk along in it into the fire. The Piazza was filled with Florentines eager to see which faction would display God’s approval by surviving the inferno. Security was heavy: foreigners were banished from the city and a strong guard set to prevent disorders. The Franciscans arrived quietly but the Dominicans paraded in singing a psalm.

At this point delays began to occur. The Franciscans demanded that Savonarola remove his heavy robe; he agreed. The Franciscans then insisted he remove his undergarments lest they be enchanted with fire-prevented spells; finally, both sides agreed to exchange garments. Then the Franciscans objected to Savonarola carrying the eucharistic host into the flames. After many hours and much argument, it began to rain and the event was cancelled.

Florentines interpreted this turn of events as a divine repudiation of Savonarola. The citizens turned against their prophet with a vengeance. Mobs sacked the Dominican church; Savonarola and his associates were arrested and tortured. On May 23 the Dominicans were hanged and burnt in the same square where the trial by fire was to have taken place.