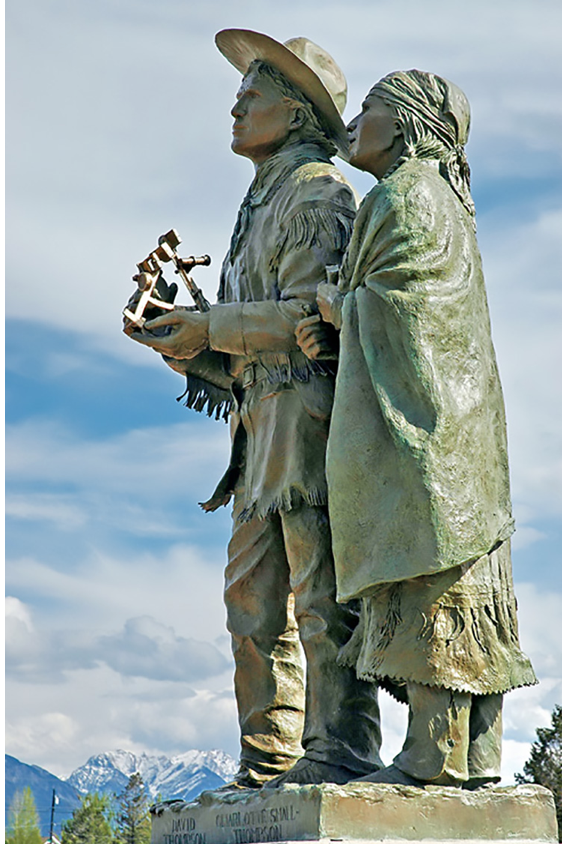 A tip of the beaver hat today to the man dubbed the “greatest practical land geographer that the world has produced”.

David Thompson was born in London to a poor Welsh family and was given a practical education in mathematics and surveying by a charity foundation. At the age of 14 he was indentured to the Hudson’s Bay Company and sent to the northern port of Churchill in what is now Manitoba, Canada. After serving as a clerk at several of the company’s trading posts, he became a fur trader and surveyor, mapping routes deep into the interior, despite a limp and the loss of vision in one eye. He became fluent in four native languages, compiling dictionaries of these tongues, and was almost always on excellent terms with tribes he encountered.

In 1797, frustrated because the HBC wanted him to abandon surveying and concentrate on the acquisition of furs trapped by native hunters, he switched his allegiance to the North West Company which was then involved in a heated rivalry with his old employers. There, his surveying skills were more highly valued. He worked along the disputed American border, Lake Superior, up the Mississippi River, and into the Rocky Mountains. His contributions were so valuable to the NWC that he was made a full partner of the firm.

In 1799 he married a 16-year-old (some say 13-year-old) Métis woman, Charlotte Small, with whom he enjoyed a 58-year marriage and 11 (some say 13) sons and daughters. She and their children often accompanied him on his travels.

With American explorers such as the Lewis and Clark expedition  pushing farther west, the North West Company commissioned Thompson to find a way to the Pacific Ocean. From 1807 to 1812 Thompson explored territories in what is now British Columbia, Washington, Montana, and Idaho, claiming vast swaths for Great Britain as he went.

Before retiring to Montreal in 1812 so that his children could get an education, Thompson had walked or paddled over 55,000 miles and charted 1.9 million square miles of wilderness. His later years were marked by ill health, poor finances, and neglect by the companies he had worked so hard for. He died in poverty in 1857 and was buried in an unmarked grave. Only in the 20th century was his massive contribution to history recognized. Thompson’s journals, enormously valuable for geographical, botanical and sociological observations, were finally published; statues and memorials were erected to him in Britain, Canada, and the United States; an exploration vessel, an astronomical observatory, a highway, and a university were named after him.