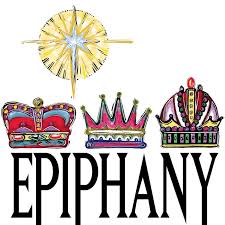 From the Greek epiphania, or manifestation. Celebrated in both Eastern and Western churches on January 6, Epiphany marks a number of important appearances or manifestations: the arrival of the Magi, the baptism of Jesus, the miracle at Cana and the Feeding of the 5000.

Its first appearance seems to have been in the second century A.D. among the Basilidean heretics of Alexandria who believed that Jesus did not become divine until his baptism which they claim had taken place on January 6. Though this idea of a late-acquired divinity was rejected by orthodox Christianity, some churches seem to have used the date to celebrate Christ’s earthly birth — an epiphany of a different kind. When in the fourth century Rome adopted December 25 as the day to celebrate the Nativity the Western churches’ Epiphany emphasis shifted to focus on the Magi while in the East stress was placed on the baptism. The period between these two important holy dates became known as the Twelve Days of Christmas.

Epiphany became an official holiday in the Eastern Roman Empire, marked by a ban on chariot racing and attending games in the arena and by ceremonies of blessing the waters. At these ceremonies the emperor would drink the waters three times to the cry of “The emperor drinks!” The blessing of the waters takes place even today in Orthodox denominations. A priest will bless a body of water, either inside, or by a lake, river or sea and the faithful take it home where it will be used to sprinkle on houses, barns and fields to ensure prosperity for the coming year. In some places the priest will throw a cross into the water and divers will race to be the one to recover it.

In the West, Epiphany was a day to celebrate the visitation of the Magi or the Three Kings as they became known. Religious services honouring the Magi gradually turned into dramas held outside of the church such as The Play of Herod. As returning Crusaders in the twelfth and thirteenth centuries brought back stories of the fabulous east, fascination with the Magi grew — cities held processions honouring the Kings and carols retelling their journeys were sung. (The remnants of these customs are the Star Boys and their January pilgrimages from door to door.) Epiphany came to be a time all across Europe for popular celebrations marked by eating a cake and gift-giving.

The custom of the King’s Cake, Twelfth Night Cake, Dreikönigskuchen, gâteau des rois, etc., can be traced back to the thirteenth century. A bean or a pea or a coin was baked into the cake and the lucky finder was named king or queen of the party and could direct others to do his bidding for the evening. Though the tradition lingers in much of Europe (as well as French America) the custom in England was displaced to December 25 where it became the Christmas cake. In medieval France it was customary to put a piece of the cake aside for the poor or to collect money from the rich for their share of the cake and use the money for a charity.

Because the Christmas season ends in many parts of the world on January 6, Twelfth Night became a time of raucous celebration, associated with masking, mumming, drinking and social inversion. This misrule may have been a carry-over to some extent from the riotousness of the pagan Kalends. In Byzantium for example church councils had to legislate against the dancing and transvestism that went on in early January. During the reign of Michael III (842-67) the emperor and his court went so far as to use the occasion to mock the Patriarch of Constantinople and the Mass itself. Mock coronations and consecrations become common in medieval Europe with clerical hijinks, cross-dressing, noise and laughter the order of the day on Twelfth Night.

To commemorate the visit of the Magi who brought gold, frankincense and myrrh to the infant Jesus, Epiphany became the day for giving gifts, especially to children. In the Spanish-speaking world the eve of the day of Los Tres Rejes Magos is when the three wise men pass through on their way to Bethlehem and leave presents for kids who, in turn, leave out snacks for the kings and their camels. In Spain their Majesties and their attendants can be seen processing through the city streets on January 5 in great splendour. In Italy the night of January 5 sees the visit of the Befana (the name itself is a corruption of Epiphania), an old lady who refused to spare time from her housekeeping to accompnay the Three Kings on their journey. She soon repented of her decision and tried to join the Magi but has never succeeded to this day. She therefore visits each home in search of the Christ Child and leaves presents for the little ones that she finds sleeping there.

In parts of the Middle East there is a charming story about this night and another gift-bringer. On the Night of Destiny, when the Magi first journeyed to Bethlehem the palm trees bent down to show them the way — as they have done, says legend, every January 5 since. Once a mule was tied to a tree on such a night and when the trees sprang back to their ordinary posture the beast was whipped high into the branches. To mark this miracle the Mule was made the gift-bringer in Lebanon where doors are left open for him to bring in the presents and where hay and water are set out to refresh him.

Epiphany is also the time for houses to be blessed for the coming year. A priest will recite a prayer, sprinkle the house with holy water and cense the home and barn. The initials of the Magi and the number of the year are chalked on the door frame as in “20 K+M+B 15”. Even the chalk can be first consecrated with a Ceremonial Blessing of the Chalk.

Just as Epiphany serves as a time for houses to be blessed and evil forces expelled from them, so is January 6 the date for driving demons out of the whole town. In parts of Switzerland boys go about on Twelfth Night to make noise with horns and whips to drive away nasty wood spirits.  In the eastern Alps, the Berchtenlaufen ceremony sees 200-300 boys with masks, cowbells, whips and weapons shoot up the sky and make and make as much noise as possible.  In Eschenloe  in Upper Bavaria, three women with bags over their heads go house to house carrying a chain, a rake and a broom. They knock on doors with the chain, scrape the ground with the rake and sweep with the broom, all to clear away evil.

In England it has been the custom since the Middle Ages for the reigning king or queen to imitate the giving of gifts which the Magi brought. On January 6 during the Epiphany service in the Chapel Royal at Saint James’s Palace two Gentleman Ushers, acting on behalf on the monarch, bring forth silken bags containing gold, frankincense and myrrh. The gold is in the form of twenty-five gold sovereigns which, after the service, is changed into ordinary currency and donated to the poor. This presentation used to be carried out by the ruler himself until the madness of King George III prevented his participation; since then servants have carried out the custom by proxy.