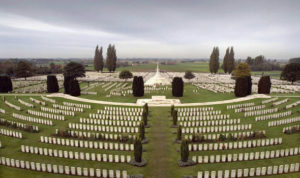 The slaughter of World War I produced millions of corpses which had to be identified and buried. Out of this necessity arose the Commonwealth War Graves Commission whose tireless work for decades has led to the creation of mass battlefield cemeteries around the world and individual markers for as many dead as possible.

In 1917 Rudyard Kipling, whose son John had died 2 years earlier,  was appointed to the Imperial War Graves Commission as its literary advisor. Every word the Commission used was written, chosen or approved by him, including the dignified inscription on the headstone of the unidentified dead, ‘A soldier of the Great War. Known unto God’. This could be adapted to incorporate any scrap of information that could be discovered about the dead man: a Canadian soldier, a German soldier, a Corporal of the Black Watch, or, as in the case of John Kipling, an 18-year-old  Lieutenant in the Irish Guards.

Those who could be identified are honoured by a stone marker with name, age, and military unit, and an inscription chosen by the families they left behind. Some are sternly patriotic, some are trite, some are religious; all are moving. 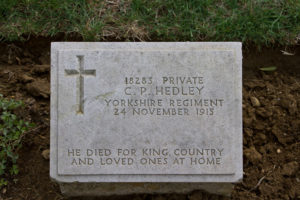