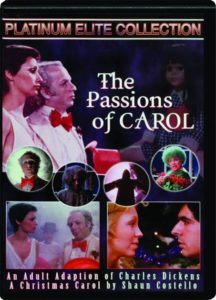 There have been many variations on Charles Dickens’s A Christmas Carol: it has been set in London, in the American Midwest, in black ghettoes and modern television studios; Scrooge has been played by men, women, Muppets, puppets and cartoon ducks. Few versions, however, have stretched the genre as much as The Passions of Carol, a 1975 pornographic movie starring Merrie Holiday. Directed by Shaun Costello, the movie examines the change of heart Christmas brings to Carol Scrooge, a cruel editor of a skin magazine.