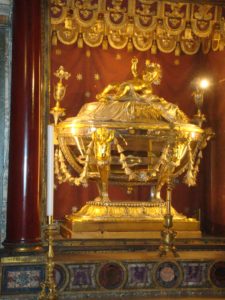 A box or trough in which food for livestock is placed. Luke’s gospel relates how when Jesus was born in a stable his mother laid him in a manger; pious legend has it that the animals of the stable warmed him and watched over him there. Representations of the manger can be seen in the near-universal crèche, in artwork depicting the Nativity as well as in the lattice-work crust of the Christmas mince pie and the straw placed under the tablecloth in eastern European homes. Carols celebrating the scene include “Away in a Manger”, “O Holy Night” and “Tomorrow Shall Be My Dancing Day”.

The church of Santa Maria Maggiore in Rome claims to possess pieces of the original Bethlehem crib, seen above — five wooden slats of sycamore brought from the Holy Land in the seventh century which are exposed on the high altar every Christmas Eve. These are believed to have formed part of an x-shaped support for the manger itself which was probably made of the same limestone that formed the cave where Jesus was born. In the sixteenth century Frederick the Wise of Saxony, Martin Luther’s patron, also had portions of the manger among his vast collection of relics but the fate of these pieces is unknown.