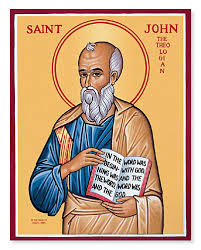 December 27 is the feast day of Saint John the Evangelist, the son of Zebedee, companion of Jesus and reputed author of the Fourth Gospel. In the Middle Ages the day was marked by a blessing of the wine, derived from the legend that John had drunk poisoned wine and not been harmed.  As Barnaby Googe in the sixteenth century related: Nexte John, the sonne of Zebedee hath his appointed day,/  Who once by cruell tyraunts will, constrayned was they say, Strong poison up to drinke, / therefore the papistes doe beleeve/ That whoso puts their trust in him,/ no poyson them can greeve.

It was also a custom for people to bring wine or cider to the church on December 27 to be blessed and then to take this liquor home to be poured back in the barrels. This “St. John’s Wine” was considered a protection for travellers setting out on a journey or for those near death. Because the gospel of John proclaims Jesus as the light of the world, a German custom allowed children named John or Joan to be the first to light the Advent candle.