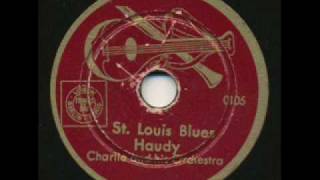 The Axis powers of World War II were famous for their use of English-speaking radio personalities such as Lord Haw-Haw and Tokyo Rose as disseminators of propaganda. What is less well-known is the use of jazz and swing music by the Nazis in attempts to demoralize Western troops and civilian audiences.

Joseph Goebbels used the radio programme “Germany Calling”, first broadcast on this day in 1939, as a means of mocking enemy leaders and sowing discontent. In order to attract listeners in America and Britain he sanctioned musical numbers that were otherwise banned in Germany as being “Negermusik”, “degenerate”, “African”, or “Jewish”. He hired jazz musicians who had performed in underground clubs to do their patriotic duty on radio as “Charlie and His Orchestra”.

Here are the lyrics of Charlie’s version of “You’re Driving Me Crazy”, 1940.

Here is Winston Churchill’s latest tearjerker:
Yes, the Germans are driving me crazy!
thought I had brains,
But they shattered my planes.
They built up a front against me,
It’s quite amazing,
Clouding the skies with their planes.

This first clip is an early broadcast. The second two date from 1944 as the invasion of western Europe drew closer.

Announcers like Lord Haw-Haw were treated harshly after the war because they tended to be citizens of Allied powers but the musicians of Charlie’s orchestra went on to have successful careers in post-Hitler Germany.