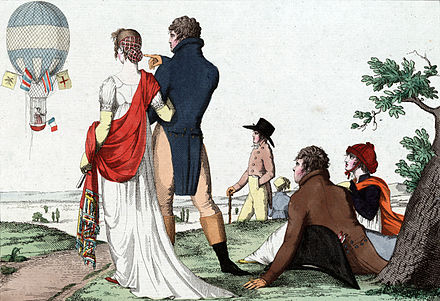 Late in the 18th century the French were fascinated by the globe aérostatique, hot-air ballooning. Since the Montgolfier brothers made the first ascent in 1783, the possibilities for air travel — military, commercial, recreational — tickled the French imagination. Women were among the first passengers and in 1799 Jeanne Geneviève Garnerin (neé Labrosse) became the first woman to fly solo and pilot a lighter-than-air craft when she took a hydrogen balloon aloft.

Mme Garnerin was made of very brave stuff. Her husband André-Jacques Garnerin, who would be named the Official Aeronaut of France, had been the first to jump from a balloon and survive with the aid of a parachute. On October 12, 1799 Jeanne Geneviève took a balloon to an altitude of 900 meters and separated her basket from the balloon, controlling her descent with an attached parachute — the first woman to do so. They later filed a patent for  “a device called a parachute, intended to slow the fall of the basket after the balloon bursts. Its vital organs are a cap of cloth supporting the basket and a circle of wood beneath and outside of the parachute and used to hold it open while climbing: it must perform its task at the moment of separation from the balloon, by maintaining a column of air.”