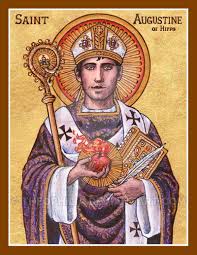 Aurelius Augustinus is born in Thagaste, Numidia. As Augustine of Hippo he will be regarded as the greatest mind of Late Antiquity, a Doctor of the Church and patron saint of brewers, printers, theologians, sore eyes and Kalamazoo.

The son of a pagan official and a devoutly Christian mother, Augustine was given an excellent education in the traditional Roman classics. As a young man he fell among Manichees and became a follower of that dualistic religion which was spreading from Persia. He became a teacher of rhetoric in Carthage and took a mistress who bore him a son, Adeodatus. In 383 he taught rhetoric in Rome but his friendship with the influential politician and scholar Symmachus won him as post of professor of rhetoric in the imperial capital of Milan. By this time he was disillusioned with Manichaeism and had become interested in Neoplatonism. In Milan he was taken up by the Christian bishop Ambrose whose combination of piety and learning drew Augustine closer to the faith of his mother. A conversion experience in 386 led to his Christian baptism. In 388 he returned to North Africa, where he gave most of his property to the poor and became a priest in the town of Hippo Regius. His renown as a preacher and scholar led to his becoming bishop, a post he was still occupying at his death in 430.

North Africa was the scene of many lively (and occasionally deadly) theological disputes. Augustine would preach and write not only against pagans, Manichaeans, Donatists, Arians but also Pelagians and Semi-Pelagians. Among his monumental works are The City of God Against the Pagans, with its sweeping understanding of human nature and history and Confessions, the first spiritual autobiography. His views on predestination were enormously influential in the development of Protestantism. He died while his city was under siege by the barbarian Vandals. His relics are enshrined in Pavia, Italy.