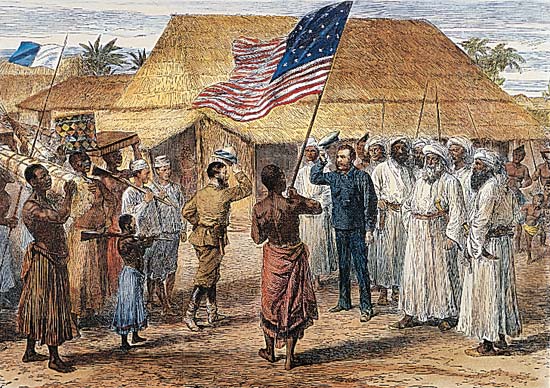 An expedition led by journalist Henry Stanley discovers the long-lost missionary David Livingstone. Livingstone had gone as an evangelist to Africa in the 1850s and though he was unsuccessful at converting the native inhabitants his reports back to Britain were widely-read. His stories of his endless travels and the evils of the Arab slave trade made him a hero in the English-speaking world. He disappeared from sight in 1866, supposedly searching for the headwaters of the Nile. When nothing had been heard from him for years the New York Herald sent Stanley to find him. Stanley’s own expedition into the interior was perilous but he eventually reached the missionary in what is now Tanzania. His first words to his quarry became famous: “Doctor Livingstone, I presume?” Stanley went on to a life of continuous adventure, eventually discovering the sources of the Nile and winning a knighthood; Livingstone died of malaria in 1873 and is buried in Westminster Abbey.