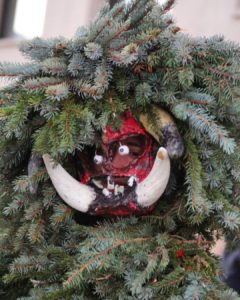 December 31 is the feast day of St Sylvester, the fourth-century pope during whose reign (314-35) persecution of Christians ceased and Christianity received the favour of the emperor Constantine. In legend Sylvester was supposed to have cured the emperor of leprosy and received western Europe from him through the spurious Donation of Constantine. In German speaking countries “Silvester” is the name given to New Year’s Eve and its festivities

Every December 31 (St Sylvester’s Day) and January 13 (Old St Sylvester’s Eve) men of Urnäsch in eastern Switzerland don fantastic costumes and go, in groups, from door to door. There are three types of dress, depending on the level of grotesqueness: the Wüeschti, or the ugly Chläuse is covered in bark and branches and wears a frightful mask; the Schö-Wüeschti, or less-ugly, is equally piney less frightening; and the Schöne or pretty Chläuse wears a huge bell or a massive headdress depicting a rural scene. At each house they sing three zäuerli, or wordless yodels and are rewarded with a drink, food and money before going on to the next destination. Once part of the widespread phenomenon of Christmas-tide begging visits, the custom is now kept alive partly out of a love for local tradition and partly for the tourist trade that it attracts.

New Year’s Eve in Ireland, Oiche na Coda Moíre, is called the Night of the Big Portion because of the belief that in order to ensure prosperity for the home in the new year a huge meal must be eaten on December 31. In fact, in some areas it was once believed that all the food in the house on New Year’s Eve had to be devoured.