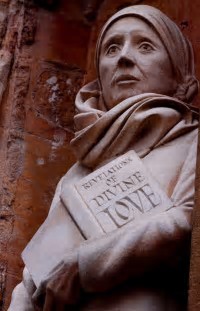 The term “anchoress” refers to a type of female hermit. In the late 1300s a woman known to history as “Julian of Norwich” (c. 1342-c. 1416), whose true name is unknown and who was called after the church in which she lived, moved into a little cell in a church in Norwich to spend the rest of her life in contemplation of God. She proved to be one of the great mystics of the late Middle Ages and the first female author of a book in English.

In 1373 she experienced the first of a series of visions which she described in her book Revelations of Divine Love. Later she wrote of her theological speculations on these visions in a book known as The Long Text. For Julian God is a god of love, not of anger or punishment: “For I saw no wrath except on man’s side, and He forgives that in us, for wrath is nothing else but a perversity and an opposition to peace and to love.” She is famous for having spoken of Jesus in maternal terms and for the saying “All shall be well, and all shall be well, and all manner of thing shall be well”. Her works are still in print study and are the subject of much academic interest. Recently, Denys Turner’s book Julian of Norwich, Theologian, has sparked interest in her as more than simply a mystic but a genuine Doctor of the Church.