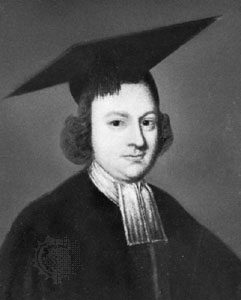 Christopher Smart (1722-71) was an English poet and scholar, sadly famous because of a mental illness that plagued his adult years. He was a friend of Samuel Johnson, who said in defence of him: “He insisted on people praying with him; and I’d as lief pray with Kit Smart as any one else. Another charge was, that he did not love clean linen; and I have no passion for it.”

His greatest poetical work was Jubilate Agno, written when he was incarcerated in an asylum. Its most famous passage concerns his cat:

For I will consider my Cat Jeoffry.
For he is the servant of the Living God duly and daily serving him.
For at the first glance of the glory of God in the East he worships in his Way.
For this is done by wreathing his body seven times round with elegant quickness.
For then he leaps up to catch the musk, which is the blessing of God upon his prayer
…

For when his day’s work is done his business more properly begins.
For he keeps the Lord’s watch in the night against the adversary.
For he counteracts the Devil, who is death, by brisking about the life
…

For God has blessed him in the variety of his movements.
For, tho he cannot fly, he is an excellent clamberer.
For his motions upon the face of the earth are more than any other quadrupede.
For he can tread to all the measures upon the musick
For he can swim for life.
For he can creep.

In 1943 Benjamin Britten set the poem to music as “Rejoice in the Lamb”. Here is a section of that: