1728 Benefit Performance of The Beggar’s Opera

John Gay’s musical treatment of the London underworld was the sensation of 1728’s theatre season. The star of the show was 20-year-old Lavinia Fenton who played the heroine Polly Peachum. Though not a striking beauty she was a good actress and singer who seemed to radiant attractiveness. Her picture became a London pin-up, her songs were printed on ladies, crowds flocked to hear her sing, and a special benefit performance of the opera was held in her honour.

Certainly one frequent attender in the audience found her irresistible. This was Charles Powlett, the third Duke of Bolton, older than Lavinia by over 20 years, but possessed of huge tracts of land, deep pockets, and political clout. He was unhappily married, separated from his wife, and was determined that the fair Lavinia should be his. A print by Hogarth shows a scene from The Beggar’s Opera with a portrait of the actress in white, kneeling, and the smitten Duke seated in the box at the far right. 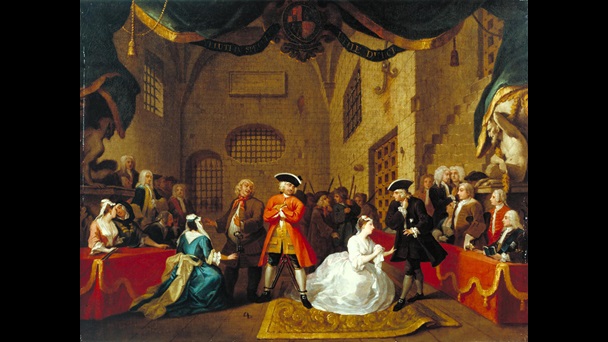 By the end of the theatre season Bolton had persuaded Miss Fenton to leave the stage for good and become his mistress. Their relationship was a long and happy one. She was treated well by society and bore him three sons out of wedlock. In 1751 Bolton’s wife died and he promptly married Lavinia, making her a Duchess. She was the first of a long line of actresses who married into the aristocracy; a model, perhaps, for Meghan Markle.