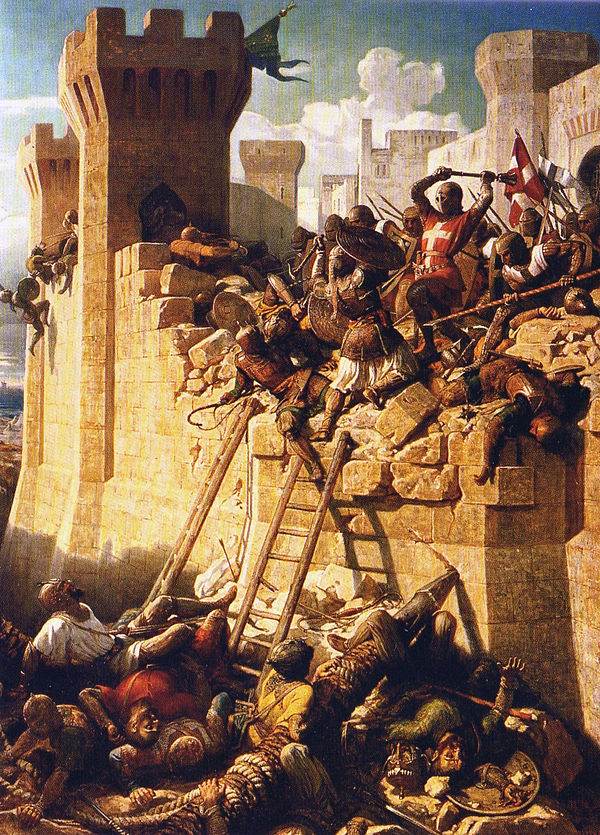 Pope Urban II in 1095 summoned the kings of Europe to liberate the Holy Land from Muslim occupation. The result was the First Crusade which took advantage of Islamic disunity in the eastern Mediterranean to reconquer lost Christian territory in the Levant, culminating with the capture of Jerusalem in 1099. Most of the victorious western European knights returned home, but many stayed on to establish four crusader states: the County of Edessa, the Principality of Antioch, the County of Tripoli, and the Kingdom of Jerusalem. The were fragile Catholic feudal entities ruling over a mixed population of Orthodox Christians, Armenians, and Muslims, sustained by a trickle of outside immigration and militarily dependent on the fighting monks of the Templar, Hospitaller and Teutonic Orders.

When the quarrelling Muslim powers in the region put aside their differences or were subdued by a stronger Islamic state, things went badly for the crusaders. First under the Seljuq Turks and then under the Egyptian Mamluks, Muslim forces nibbled away at the westerners. First Edessa fell, then Jerusalem, leaving only a narrow strip of coastline under crusader control.

Throughout the thirteenth century pressure on this enclave grew. When Tripoli was taken in 1289, it left only the port of Acre and its environs in the hands of the crusaders. In early April 1291, Muslim armies converged on it from several directions, assembling a massive force with numerous siege engines. The resistance was led by the Templars and the Hospitallers (also called the Knights of St John) who held out for six weeks before the walls were reduced by battering and house-to-house combat took place. On May 18, the city surrendered, effectively ending the crusader presence in the Middle Eastern landmass. The Kingdom of Jerusalem set itself up in Cyprus, the Knights of St John took the island of Rhodes off the Turkish coast, and the Templars would soon be dissolved and murdered by the French King, Philip the Handsome. It was not until 1917 when General Allenby’s British forces took Jerusalem from the Turks that a western army had success in the Holy Land.