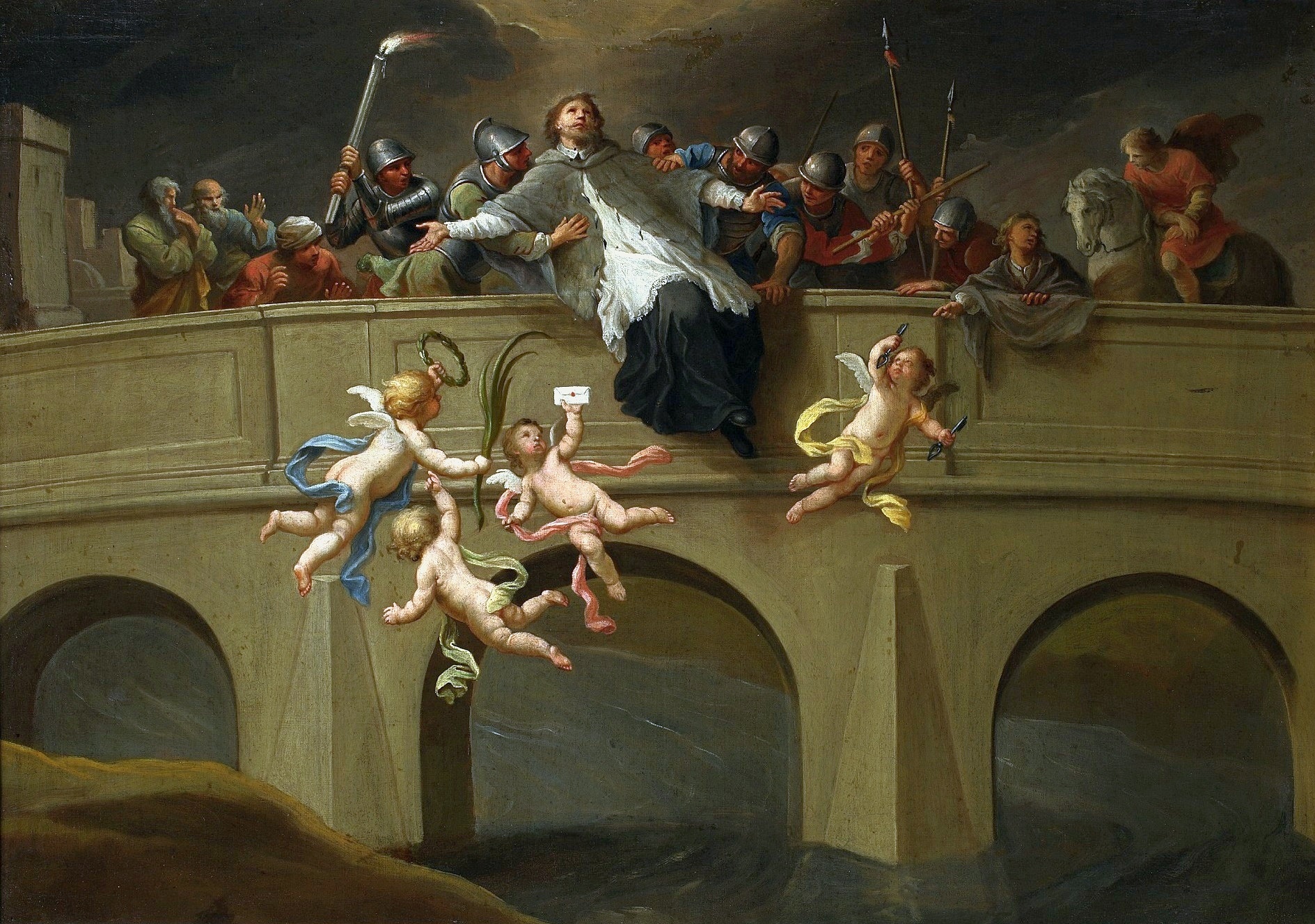 Butler’s Lives of the Saints tells us:

JOHN was born, in answer to prayer, 1330 [or 1345 according to some], of poor parents, at Nepomuc in Bohemia. In gratitude they consecrated him to God; and his holy life as a priest led to his appointment as chaplain to the court of the Emperor Wenceslas, where he converted numbers by his preaching and example. Amongst those who sought his advice was the empress, who suffered much from her husband’s unfounded jealousy. St. John taught her to bear her cross with joy; but her piety only incensed the Emperor, and he tried to extort her confessions from the Saint. He threw St. John into a dungeon, but gained nothing; then, inviting him to his palace, he promised him riches if he would yield, and threatened death if he refused. The Saint was silent. He was racked and burnt with torches; but no words, save Jesus and Mary, fell from his lips. At last set free, he spent his time in preaching, and preparing for the death he knew to be at hand.

On Ascension Eve, May 16, [1393] Wenceslas, after a final and fruitless attempt to move his constancy, ordered him to be cast into the river, and that night the martyr’s hands and feet were bound, and he was thrown from the bridge of Prague. As he died, a heavenly light shining on the water discovered the body, which was buried with the honours due to a Saint. A few years later, Wenceslas was deposed by his own subjects, and died an impenitent and miserable death.

In 1618 the Calvinist and Hussite soldiers of the Protestant Elector Frederick tried repeatedly to demolish the shrine of St. John at Prague. Each attempt was miraculously frustrated; and once the persons engaged in the sacrilege, among whom was an Englishman, were killed on the spot. In 1620 the imperial troops recovered the town by a victory which was ascribed to the Saint’s intercession, as he was seen on the eve of the battle, radiant with glory, guarding the cathedral. When his shrine was opened, three hundred and thirty years after his decease, the flesh had disappeared, and one member alone remained incorrupt, the tongue; thus still, in silence, giving glory to God.

John was canonized in 1729 and is one of the favourite Czech saints. He is the patron of those suffering from untrue calumnies and a protector from floods and drowning.