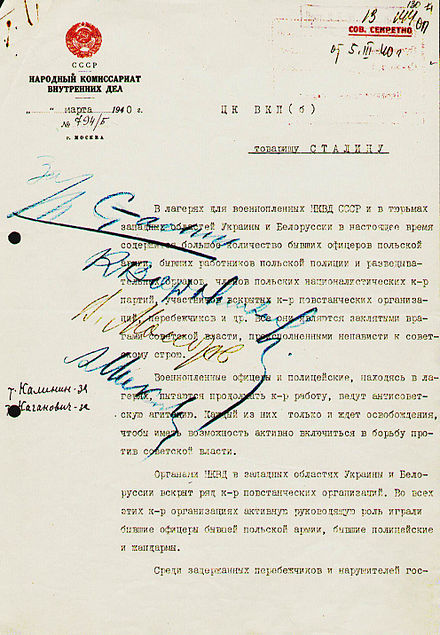 World War II began in Europe with the German invasion of Poland. This unprovoked attack was made possible by a secret pact between the Nazis and the USSR, an agreement which allowed the Soviets to annex the eastern part of Poland. This partition brought tens of thousands of Polish prisoners under the rule of Joseph Stalin who, at the urging of his secret police chief Lavrentiy Beria, determined to use the opportunity to exterminate Poland’s leadership class. On this date in 1940, six members of the Politburo (Stalin, Kaganovich, Molotov, Voroshilov, Mikoyan and Kalinin) signed an order condemning imprisoned “nationalists and counterrevolutionaries” — the captive officers and intelligentsia — to death.

In April, 1940, 22,000 Poles were taken from their prison camps and dispatched to killing zones where they were shot and secretly buried. About half of the Polish officer class were killed — an admiral, two generals, 24 colonels, 79 lieutenant colonels, 258 majors, 654 captains, 17 naval captains, 85 privates, 3,420 non-coms, 7 chaplains (including the Chief Rabbi of the Polish Army), and 200 pilots, but also government officials, landowners, university professors, physicians, lawyers, engineers, teachers, writers and journalists. The purpose was to eliminate anyone who might be a leader in a future Poland.

After June 1941, when Hitler invaded the Soviet Union and the USSR began to think of creating an anti-German army out of its remaining Polish prisoners, questions began to be asked about the fate of the missing officers. The Soviets were able to dodge awkward questions until early 1943 when the occupying German army was alerted to mass graves containing the corpses of thousands of Polish officers in the Katyn Forest. Sensing a propaganda coup, the Nazis brought in a team of neutral experts to examine the bodies and determine the date of their execution. Despite their findings that the men had been killed at a time when the Soviets were in control of the area, the USSR continued to blame the Germans.  Shamefully, it was in the interests of Allied cooperation with the Soviets to agree to go along with the lie during the war.

When I was a grad student in London in the 1970s, I went on a march to the Soviet Embassy, which had objected to a Katyn memorial being erected with the date 1940 inscribed on it. Communists were still insisting that the Germans had carried out the massacre in 1941 during their occupation of  the western USSR. Only after the fall of the Soviet Union did Russia acknowledge that the atrocity had been carried out by the Soviet secret police.

An excellent fictional account of the 1943 discovery is Philip Kerr’s A Man Without Breath. 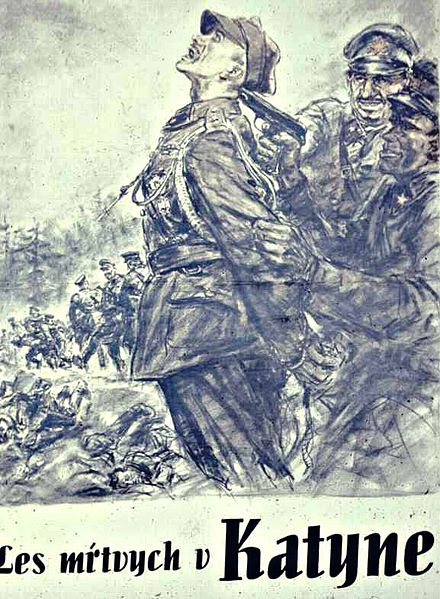