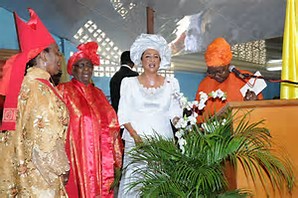 The holiday in the Caribbean nation of Trinidad and Tobago commemorates the repeal on March 30, 1951, of the 1917 Shouter Prohibition Ordinance that prohibited the activities of the Shouter or Spiritual Baptist faith.

When West African slaves were imported to the American hemisphere, they often clung to many of their traditional religious practices. Sometimes these customs were kept alive in secret, and sometimes by grafting them on to Christian elements. In Catholic countries hybrid folk religions called candomble, orisha or santeria developed. In Protestant countries African ecstatic dancing, prophecy and reception of the Holy Spirit in extravagant ways resembled certain Methodist or Shaker devotions. The Spiritual Baptist sect arose on some British West Indian islands and included “catching” of the Spirit, sanctified shouting, elaborate costumes and wonderfully catchy music.

Colonial officials were worried about the potential for unrest in these services and banned them in 1917, saying: “It is not only the inconvenience caused by the noise which they make that has given rise to this legislation, but also the fact that from the information that has been received, the practices which are indulged in are not such as should be tolerated in a well-conducted community”.

The abolition of this act which allowed the sect, whose followers probably number in the hundreds of thousands, to flourish again, is celebrated on this day on Tobago.