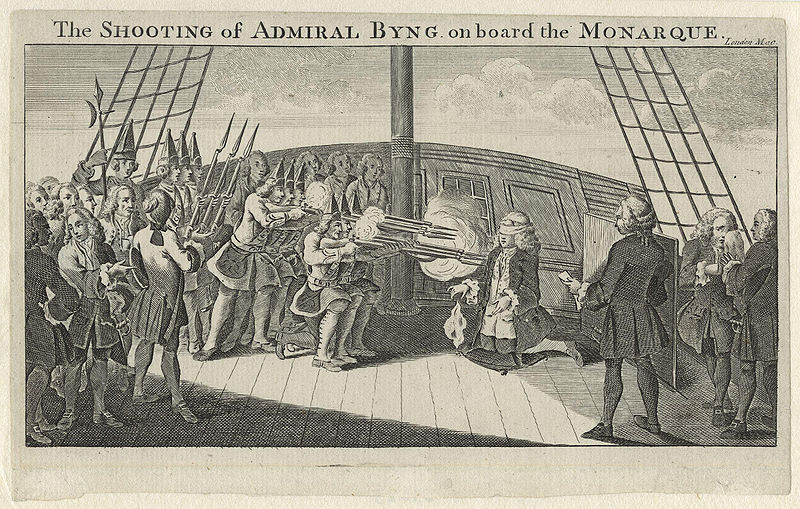 The death of an admiral to encourage the others

Talking thus, we approached Portsmouth. A multitude of people covered the shore, looking attentively at a stout gentleman who was on his knees with his eyes bandaged, on the quarter-deck of one of the vessels of the fleet. Four soldiers, placed in front of him, put each three balls in his head, in the most peaceable manner, and all the assembly then dispersed quite satisfied.  What is all this?” quoth Candide, “and what devil reigns here?” He asked who was the stout gentleman who came to die in this ceremonious manner. “It is an Admiral,” they answered. “And why kill the Admiral?” “It is because he has not killed enough of other people. He had to give battle to a French Admiral, and they find that he did not go near enough to him.” “But,” said Candide, “the French Admiral was as far from him as he was from the French Admiral.” “That is very true,” replied they; “but in this country it is useful to kill an Admiral now and then, just to encourage the rest [pour encourager les autres].”‘

John Byng (1704-57) was a successful British admiral, Member of Parliament, and former governor of Newfoundland who had the misfortune of failing in a single battle. For this misdeed he was judged by the British Admiralty to have failed in his duties and was executed on the deck of his flagship.

The island of Minorca, off the Spanish coast, had been captured by the British in 1708 but in the Seven Years War was threatened with invasion by a French fleet. Byng was ordered to take a hastily-assembled and under-manned flotilla to reinforce the island but when he arrived in Minorcan waters in May of 1756 he found the French were already there in strength. After an inconclusive naval engagement, Byng concluded that the island was lost (indeed, it was to capitulate) and that he would return to Gibraltar for repairs. There he found orders commanding him to return to England for trial for a breach of the Articles of War.

The 1757 court martial acquitted him of cowardice but convicted him of not doing his utmost, a crime punishable by death. There were influential voices calling on King George II to extend mercy but the monarch declined and Byng was executed, himself giving the signal to fire by dropping his handkerchief. Most agree that this was an unjust result but some historians argue that the death of Byng served to inculcate a spirit of aggression in British naval commanders which would serve them well in future wars.

To the perpetual Disgrace
of PUBLICK JUSTICE
The Honble. JOHN BYNG Esqr
Admiral of the Blue
Fell a MARTYR to
POLITICAL PERSECUTION
March 14th in the year 1757 when
BRAVERY and LOYALTY
were Insufficient Securities
For the
Life and Honour
of a
NAVAL OFFICER