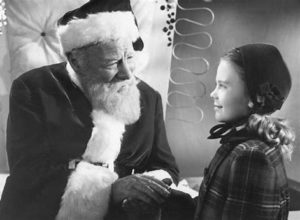 Now just a synonym of Santa Claus, “Kris Kringle” shows an interesting history of linguistic change over time. The name originates from Christkindl, the German term for the Christ Child who was thought to bring gifts. From the seventeenth to the nineteenth century, from its European origins to North America where it was brought by immigrants, the name mutated to Krischkindel to Kriss Kindle, to Kriss Kinkle and, by 1842 in Philadelphia, to Kriss Kringle. In an 1855 article in Putnam’s Monthly. The narrator, Mr. Sparrowgrass implores his wife to mind her language:

“My dear,” said I after a pause, “speaking of children I wish you would not teach the young ones so many of your Philadelphia phrases….Mrs. Sparrowgrass, next Christmas Santa Claus, if you please – no, Kriss Kringle. Santa Claus is the patron saint, Mrs. Sparrowgrass, of the New Netherlands, and the ancient Dorp of Yonkers; he it is who fills the fireside stockings; he only can come down Westchester chimneys, and I would much prefer not to have the children’s minds and the flue occupied with his Pennsylvania prototype.”

We see in American children’s books such as  Kriss Kringle’s Christmas Tree and department store advertisements that the name was being applied to a Santa Claus figure far from the original notion of the Christ Child. In the twentieth century the name was spelled both “Kris” and “Kriss” Kringle. The original Miracle on 34th Street (above), for example, uses the former and the 1994 remake uses the latter.

Female belsnicklers in German settlements in the Canadian province of Nova Scotia who disguised themselves as Wise Men were known as Kris Kringles.