Why, it seems like only yesterday when the French government was dragging its heels on joining the American-led war on Saddam Hussein’s Iraq. Oh, how we mocked them for their pusillanimity (even we Canadians who also held back.) Despite the fact that the French are one of the most war-like countries in European history (anybody remember Charlemagne, Joan of Arc, Louis XIV, Napoleon I, and Napoleon III?) we focussed on their poor performance in World War II. 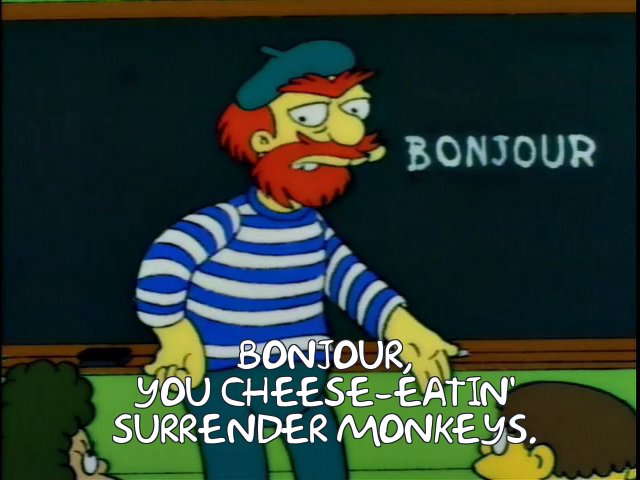 Here are some of the rude remarks which, in retrospect and considering the mess that was made of the 2003 intervention, now seem regrettable:

The French will only agree to go to war when we’ve proven we’ve found truffles in Iraq. – Dennis Miller

They’ve taken their own precautions against al Qa’ida. To prepare for an attack, each Frenchman is urged to keep duct tape, a white flag, and a three-day supply of mistresses in the house. – Argus Hamilton

What do you expect from a culture and a nation that exerted more of its national will fighting against Disney World and Big Macs than the Nazis? – Dennis Miller

War without France would be like World War Il. – Unknown

The last time the French asked for ‘more proof’ it came marching into Paris under a German flag. – David Letterman

Going to war without France is like going deer hunting without your accordion. –  Norman Schwartzkopf

We can stand here like the French, or we can do something about it. –  Marge Simpson

It is important to remember that the French have always been there when they needed us. – Alan Kent

Somebody was telling me about the French Army rifle that was being advertised on eBay the other day the description was, “Never shot. Dropped once.” – Rep. Roy Blunt, MO