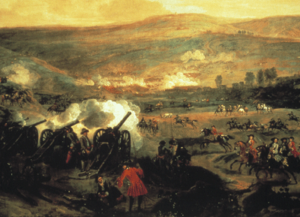 With the accession of Catholic James II to the English throne in 1685, political tensions were high. For most Englishmen and Scotsmen (because James also ruled that country) Catholicism was equated with foreign tyranny and invasion. The Spanish in the 16th century and the French in 17th century were seen as the nation’s enemies, egged on by the pope to bring England back to obedience to Rome. Some thought to exclude James from the throne but others were reassured by the fact that his Protestant daughters, Mary and Anne, would eventually succeed him. This changed when James’s second wife bore him a surprise son in 1688 — this would mean a Catholic heir. The king’s quarrels with Parliament over his plans to enforce religious toleration led to the revolt of most of his political class. With the help of a Dutch army led by her husband William of Orange, his daughter Mary returned and ousted her father from power. This so-called Bloodless Revolution may have been without much violence in England but that was not the case in Ireland where James fled to rally support.

The Irish Parliament declared their support for James, passing a bill decreeing religious toleration for both Catholics and Protestants. A French army landed on the island to bolster his claims and found much support among the Catholic population. War raged across Ireland until a decisive battle was fought on the Boyne River by the rival kings: James with an army of 25,000 French and Irish against Mary’s husband, William III, with a larger and more professional army of Dutch, English and assorted European Protestants, armed with more modern weaponry. James was driven from the field and fled to France, leaving his Irish supporters to be mopped up piecemeal over the next few years. The exiled king lived on a French pension for the rest of his life and never made a serious attempt to regain the throne, though his son James (the “old Pretender”) and grandson Bonnie Prince Charlie (the “Young Pretender”) invaded Britain unsuccessfully to press their dynastic claims.

To this day the Battle of the Boyne looms large in the memory of Ulster Protestants for whom July 12 is a grand holiday to be celebrated by marching triumphantly through Catholic areas to intimidate their neighbours.

An interesting historical irony: the papacy did nothing to support Catholic King James in 1689. Pope Innocent XI, involved in a church-state tussle with the French government, felt that James was too much a tool of Louis XIV.