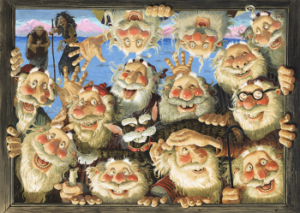 On December 12, the first of the Jólasveinar, the Icelandic Yule Lads, arrives in homes. The first is Stekkjarstaur — Fence Post, Sheep-Cote Clod or Stiff-Legged Sheep Chaser. (His stiff legs come from kneeling on the hard ground to steal the sheep’s milk.) The next is Giljagaur, the Crevice Imp or Gully-Gawk. The smallest is Stúfur, also known as Stumpy or Itty Bitty. Then comes Thvörusleikir, the Spoon Licker, followed by Pottasleikir, Pot Licker, and Askasleikir, Bowl Licker. Hurdarskellir, the Door Slammer is the noisiest of the lads while Skyrgámur, Skyr Gobbler, is partial to the local yoghurt. The crimes of the next two are self-explanatory: Bjúgnakrækir, the Sausage Snatcher and Gluggagægir, the Window Peeper. They are followed by Gattathefur, the Doorway Sniffer, Ketkrókur, the Meat Hook (prone to take to the rafters and steal the meat hanging there to cure) and Kertasnikir, the Candle Beggar. They are all rather ugly and boorish in behaviour, dressed as peasants of centuries ago.

Where once they were feared, and used by parents as a threat to keep children in line during the winter, they are now beloved characters whose arrival is welcomed and who have been woven into the commercial culture, making appearances on radio and television. Children leave out their shoes for them to deposit a treat or small present in the days leading up to Christmas.(Bad kids often receive only a rotten piece of fruit or potato as a sign that they should amend their behaviour.) After December 25 the Lads depart as they came, one by one, until Twelfth Night, January 6, when the Christmas season comes to an end.