I learned years ago that in World War II the Japanese Empire had attempted to bomb the American west coast with balloons intended to cause forest fires. I even knew that these devices had actually killed some Americans. 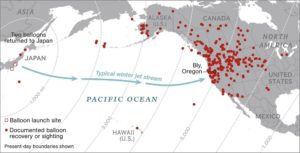 What I did not know was that these bombs also hit Canada and landed as far inland as Manitoba.

Read all about it here, 74 years after the incendiary campaign: