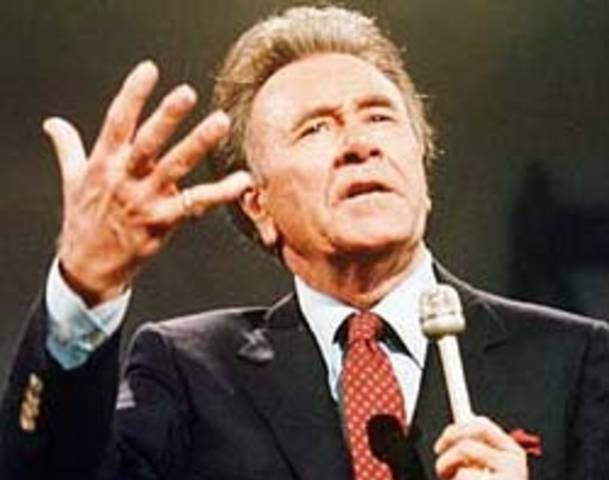 Oral Roberts (1918-2009) was one of America’s most successful televangelists. Born into a poor Oklahoma family, he claimed that at the age of 17 he was miraculously healed of tuberculosis and stuttering by God while on his way to a revival meeting. God, he said, spoke to him, saying “Son, I am going to heal you, and you are to take My healing power to your generation. You are to build Me a university based on My authority and on the Holy Spirit.”

Roberts dropped out of university before graduating and began a career as an itinerant faith healer, holding services in a large tent. By the late 1940s he had his own radio show and in 1954 he began a television ministry. He had by this time adopted a form of what would become known as the “prosperity gospel”, the belief that God wished all Christians to thrive physically and financially as well as spiritually. Part of the secret to this prosperity was “seed-faith” giving to the church, believing that this money would come back multiplied by God. He founded the Oral Roberts Evangelistic Association, Oral Roberts University, and the City of Faith and Medical Research Center, which opened in 1981, offering both prayer and medical healing for physical ailments. At its peak his various organizations employed thousands and had annual revenue of over $100,000,000. So attractive and successful was he that the United Methodist Church, a mainline denomination which felt itself in need of spiritual regeneration, recruited him to serve as one of their ministers.

Yet in the 1980s when a number of scandals rocked the world of televangelism and shaky finances plagued his cherished medical center, Oral Roberts resorted to extreme fundraising techniques. In January 1987, he announced on television that Lord had told him that unless $8,000,000 was soon raised God would “take him home.” (With the help of an extended deadline, this sum was raised.)

His biography on the oralroberts.com website claims that Roberts wrote 130 books, conducted 300 healing crusades, laying hands on over two million people and performed many miracles. After his death in 2009 his work was carried on by his son Richard.