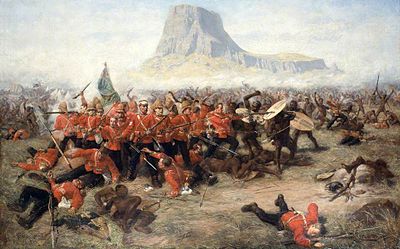 In January 1879 the British Empire went to war against the Zulu Kingdom in South Africa. The alleged cause was the brutish treatment of two women who fled the territory but in fact the British could not tolerate any obstacle to their expansion in the area (as the white Boer republics would soon find out.) Three columns of regular troops, some native auxiliaries and local militia invaded Zululand hoping to bring the Zulu army to a pitched battle where the superior firepower of a modern Western army would crush the spear and shield warriors.

On January 20, the main body of the British force under Lord Chelmsford camped under the mountain known as Isandlwana. Though in enemy territory, he did not take any serious defensive precautions such as creating a wagon fort laager, and, just as foolishly, split his forces, leaving behind some 1,300 men and two artillery pieces to defend the camp. Unbeknownst to them, 20,000 Zulus, superbly disciplined and brave, have marched against the camp; on January 22, they launched an attack into the teeth of rifle fire. The Zulus suffered 1,000 casualties in their charge but succeeded in wiping out the position, taking no prisoners and seriously denting Chelmsford’s invasion plans. The defeat, and several other lesser ones inflicted by Zulu regiments, enraged the British who were in no mood to listen to Zulu King Cetshwayo’s talk of a negotiated settlement. A second invasion defeated the Zulu Kingdom by July.