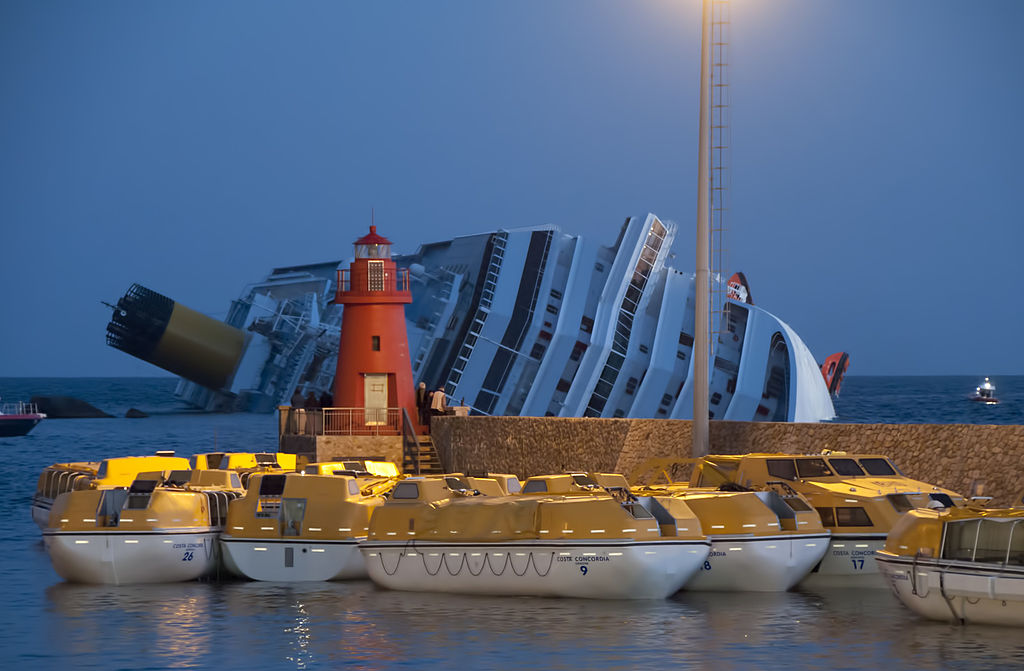 Costa Concordia was a cruise ship operated by Costa Crociere, launched in 2005.

The vessel left Rome on 13 January 2012  for a seven-day cruise. That night at 21:45 on calms seas, the Costa Concordia struck a rock in the Tyrrhenian Sea just off the eastern shore of Isola del Giglio. This tore open a 160 ft gash on the port side of her hull, which soon flooded parts of the engine room, cutting power from the engines and ship services. As water flooded in and the ship listed, she drifted back towards the island and grounded near shore, then rolled onto her starboard side, lying in an unsteady position on a rocky underwater ledge.

The evacuation of the Costa Concordia took over six hours (regulations call for it to take 30 minutes), and of the 3,229 passengers and 1,023 crew known to have been aboard, 32 died. Francesco Schettino, the ship’s captain at that time, was subsequently found guilty of manslaughter, causing a maritime accident, and abandoning his ship. He climbed he had accidentally fallen into a lifeboat and returned to land where he refused direct orders to return to his post. In his defense, Schettino explained that the sail-by salute (which brought him dangerously close to shore) was intended to pay homage to other mariners and, for business reasons, to present passengers a nice view. He denied that he did this to impress a Moldovan dancer, Domnica Cemortan, whom he had brought to the bridge. She had boarded as a non-paying passenger and later admitted the two were having an affair. He was sentenced to 16 years inprison.

The wreck was salvaged three years after the incident and then towed to the port of Genoa, where scrapping operations began.