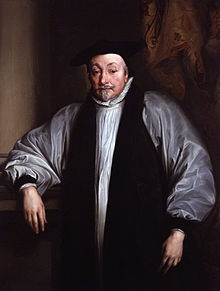 The death of an archbishop.

William Laud (1573-1645) was an English churchman during the reigns of Elizabeth I, James I and Charles I, a time when Anglicanism was being defined and when ecclesiastical issues were literally matters of life and death.

Under Elizabeth the Church of England sought a religious via media, with a Protestant theology mated with the rule of bishops and an ornate ceremonial. It was opposed by Catholics who sought a return to Rome and by Puritans who wished to purge the “popish dregs” of ceremony and episcopacy. In 1605 the attempt by Catholic conspirators to murder the entire royal family, political class and church leadership in the Gunpowder Plot convinced most Englishmen that Catholicism meant foreign tyranny and that Protestantism meant patriotism.

The latter belief became problematic when King Charles I married a Catholic French princess and covertly allowed Catholic clergy at court. The problem was exacerbated when Charles nominated William Laud to be, first, Bishop of London (1628) and then Archbishop of Canterbury (1633). Through church courts, Laud enforced a novel theology on Anglicanism, his version of Arminianism which challenged some long-held doctrines and imposed a very Catholic-looking ceremonial, and drove out Puritan leaning preachers and professors. His persecution of the dissident writer William Prynne, who was sentenced to judicial mutilation and imprisonment, was very unpopular. Prynne had been branded on the forehead with the letters “SL”, meaning “seditious libel” but which the victim claimed really represented “Stigmata Laudis” — “the marks of Laud”. By 1640 anger between the royal party and large sections of public and political opinion were at a boiling point.

After years of trying to rule on his own Charles was obliged to call Parliament which called for the arrests of the king’s chief advisors, Laud and William Wentworth. Wentworth went to the block in 1641 but Laud’s trial was delayed. He was accused of bribery, attempting to impose a tyranny, sponsoring Catholic influence, undermining Parliament and having “treacherously endeavoured to subvert the Fundamental Laws of this Realm; and to that end hath in like manner endeavoured to advance the Power of the Council-Table, the Canons of the Church, and the King’s Prerogative, above the Laws and Statutes of the Realm”. Laud was executed on this day in 1645.

Laud was exactly the wrong man for the high positions he held at the time he was appointed to them; aggressive and intolerant, he helped create the crisis that led to the English Civil War and the execution of himself and the king he served.

One thought on “January 10”