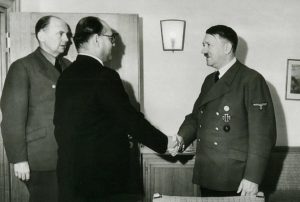 The recent Canadian hysteria over renaming public buildings or schools and tearing down statues of national heroes who no longer meet current tastes in political correctness appears to be shared by other nations.

On the African continent one looks in vain for Salisbury (now Harare) or Fort Victoria (now Masvingo). India too has for some time been renaming cities in accordance with local usages — thus Bombay becomes Mumbai, Madras becomes Chennai and Calcutta becomes Kolkata. A recent change in an island name may be more controversial. The Hindu nationalist government of Prime Minister Modi has decided that Ross Island, named after a colonial-era marine surveyor will now be known as Subhash Chandra Bose Dweep.

Chandra Bose was an Indian nationalist and one-time leader of the Congress Party, fighting for independence from Britain. Like Gandhi, he opposed Indian aid to the Allies in the Second World War but Bose took his resistance to a higher plane. In 1941 he escaped from India through Afghanistan to the Soviet Union (then an ally of Adolf Hitler) which sent him on to Nazi Germany. There he attempted to raise a volunteer force of Indian prisoners of war — the Indian Legion — to aid the German war effort in the hope that this would drive the British from India. The Nazis were lukewarm to his pretensions and to the military might of his Legion but realized he might do some real damage if he were sent back to Asia.  In February 1943 he was dispatched in a German submarine to the Indian Ocean off Madagascar where he rendezvoused with a Japanese submarine. He had ceased to be a Nazi puppet and was now an agent of Imperial Japan.

In Japan he took over the Indian exile movement and quickly raised a large force — the Indian National Army– from prisoners of war captured in Malaya. He proclaimed himself the head of the true Indian government with its own banks, postal system and administration. The INA took part in battles against the British in the Japanese drive to invade India but this was a disastrous campaign which resulted in a rout of the invaders. At the end of the war Bose died in a plane crash on Taiwan. He remains a beloved figure among Indian nationalists, despite (or, perhaps, because of) his admiration for fascism and violence.