1952 The succession of Elizabeth II

Elizabeth II, by the Grace of God, of the United Kingdom of Great Britain and Northern Ireland and of her other realms and territories Queen, Head of the Commonwealth, Defender of the Faith succeeded her father George VI on this day. She received the news while visiting Kenya as part of a royal tour. As part of Elizabeth’s formal accession she was required to sign this document: 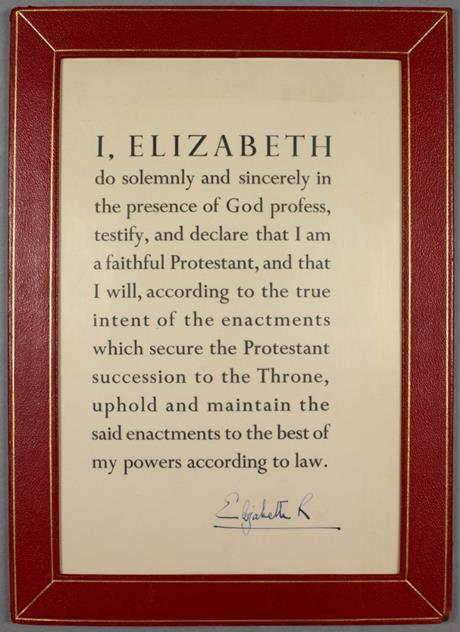 The formal insistence on the monarch’s Protestantism was a product of the Glorious Revolution of 1688 and is still a part of the job requirements. The Queen is Supreme Governor of the Church of England; whether her putative successor, the future Charles III, will be comfortable with that is open for debate. The great lummox had said he would prefer to be known as “Defender of the Faiths” [sic] but was, apparently, talked out of it.

The standard version of the royal anthem (which my generation regularly sang as schoolchildren) is:

O Lord our God arise,
Scatter her enemies,
And make them fall:
Confound their politics,
Frustrate their knavish tricks,
On Thee our hopes we fix:
God save us all.

Thy choicest gifts in store,
On her be pleased to pour;
Long may she reign:
May she defend our laws,
And ever give us cause,
To sing with heart and voice,
God save the Queen!