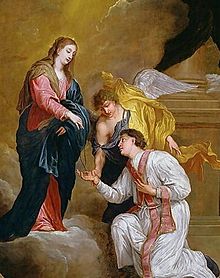 Nothing is known about the original Valentine except that he was a Roman Christian, martyred (certainly) in the third (perhaps) century. Many medieval legends grew up around the name but they may refer to one, two or three different Valentines. Geoffrey Chaucer in the 14th century led to Valentine’s Day being associated with romantic love for ornithological reasons. In his “Parliament of Foules” (meaning ‘Fowls”) Chaucer notes For this was on seynt Volantynys day/ Whan euery bryd comyth there to chese his make — “For this was on Saint Valentine’s Day when every bird comes there to choose his mate.” Because it was a day for bird mating (said Chaucer, quite  erroneously) February 14 has come to be associated with romance. 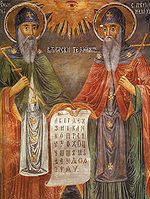 Of much more historical consequence than St Valentine is St Cyril. Cyril (827-69) and his brother Methodius (815-85) were eastern Christian monks at a time when the Slavic peoples of eastern and southeastern Europe were being evangelized. Cyril was learned in a number of languages and was sent by church officials in Constantinople as an emissary to the Islamic caliphate and the Jewish Khazars. In 862 Cyril and Methods were sent to Moravia in what is now the Czech republic as representatives of the eastern church. The Slavs there had been Christianized but were deciding whether they should look to Rome or Constantinople for religious leadership. As part of this mission the brothers attempted to translate the Bible into a Slavic dialect (Old Church Slavonic) which necessitated inventing a new alphabet — called Glagolitic, from which came all the Cyrillic alphabets of eastern Europe such as Russian or Bulgarian.

Moravia eventually chose to align itself with Rome but armed with a Slavic alphabet Constantinople led the way in evangelizing the nations of eastern and southeastern Europe and giving them liturgy and Bibles in their own tongues. This led to the formation of what is known as the Byzantine or Orthodox Commonwealth, a loose affiliation of Orthodox autocephalous churches acknowledging the primacy of the Patriarch of Constantinople. Under this principle the Russian lands became part of eastern Christianity and assured the survival of the religion after fall of Constantinople to Muslim armies in 1453.

It should be noted, however, that by allowing the eastern churches to have a vernacular liturgy they were cut off from the Latin-speaking West and the Roman heritage so that the cultures of eastern and western Europe grew apart in the Middle Ages. The East, for example, did not undergo either the Renaissance nor the Protestant Reformation.