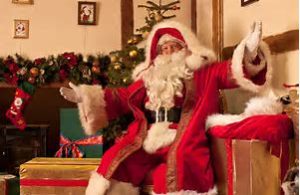 The personification of Christmas in the British Isles is Father Christmas. Some have pointed to a pagan origin (a perceived resemblance to Saturn, Neptune and Odin) but the term only comes into use in the fifteenth century when a carol addresses him: “Hail, Father Christmas, hail to thee!” He appears again the sixteenth century when social critics began to bemoan the loss of traditional Christmas hospitality. Ben Jonson’s Christmas His Masque written in 1616 for James I opens with a parade of the sons and daughters of Father Christmas: Mis-Rule, Carol, Minc’d Pie, Gamboll, Post and Paire (a card game), New-Yeares-Gift, Mumming, Wassall, Roast Beef, Plum Pudding, Offering and Babie-Cake.

After his children have been led in by Cupid Father Christmas enters despite attempts to bar him and tries to establish his credentials as a native Englishman:

“Why, gentlemen, do you know what you do? Ha! would you have kept me out? CHRISTMAS! — Old Christmas– Christmas of London and Captain Christmas! Pray let me be brought before my Lord Chamberlain; I’ll not be answered else. ‘ ‘Tis merry in hall , when beards wag all.’ I have seen the time you have wished for me, for a merry Christmas, and now you have me, they would not let me in: I must come another time! A good jest — as if I could come more than once a year. Why I am no dangerous person, and so I told my friends of the guard. I am old Gregory Christmas still, and though I come out of the Pope’s Head-alley, as good a Protestant as any in my parish.”

In Jonson’s play Father Christmas is described as a man with a long, thin beard in a costume of round hose, long stockings, close doublet, high-crowned hat, with a brooch, a truncheon, little ruffs, white shoes, with his scarves and garters tied cross, and his drum beaten before him but later seventeenth-century illustrations picture a more sedately distinguished bearded man in a long robe with a round cap. By the late eighteenth century he has grown quite fat, has holly in his hair and is dressed in a fur-trimmed robe — the image that Dickens uses for the Ghost of Christmas Present.

Father Christmas was not associated with gift-bringing until the nineteenth century when, under competitive pressure from the North American Santa Claus, he evolved into a friend of children rather than of feasting, drink and merriment. His costume is similar to that of Santa Claus but where his American counterpart has a short, belted jacket he wears a longer, open robe with a pointed hood.