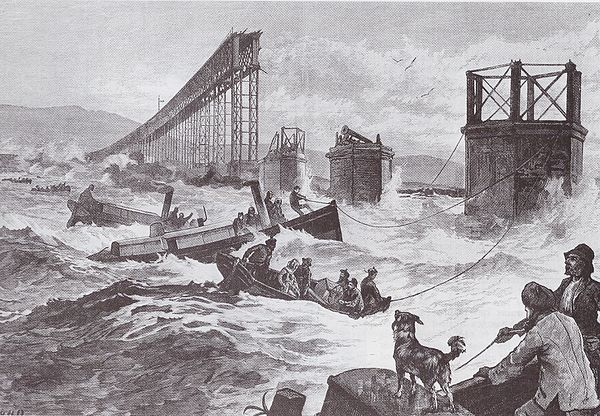 On the evening of December 28, 1879 an unexpectedly strong wind struck the bridge over the Firth of Tay in Scotland at the same moment that a passenger train heading north to Dundee was on the structure. The bridge collapsed, sending the train hurtling into the water, killed all of its passengers and crew. Only 46 bodies were recovered but it was feared as there may have been as many as 70 to 75 dead. Subsequent investigations revealed a number of design flaws, particularly regarding wind loading, poor maintenance, and excessive train speed.

Today the disaster is known best for the commemorative piece written in 1880 by William McGonnagal, possibly the world’s worst poet. A section of this masterpiece is included.

Beautiful railway bridge of the silv’ry Tay
Alas! I am very sorry to say
That ninety lives have been taken away
On the last sabbath day of 1879
Which will be remember’d for a very long time.

Oh! Ill-fated bridge of the silv’ry Tay,
I now must conclude my lay
By telling the world fearlessly without the least dismay,
That your central girders would not have given way,
At least many sensible men do say,
Had they been supported on each side with buttresses
At least many sensible men confesses,
For the stronger we our houses do build,
The less chance we have of being killed.