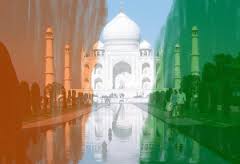 1911 The first performance of the Indian national anthem

Written in Bengali by Nobel Prize winning poet Rabindranath Tagore, the song  “Jana Gana Mana” was first sung at a meeting of the Indian National Congress. After independence, it was adopted as the Indian national anthem. In English the first verse proclaims:

Thou art the rulers of the minds of all people,

Thy name rouses the hearts of Punjab, Sindh , Gujarat and Maratha,

Of the Dravida and Orissa and Bengal;

It echoes in the hills of the Vindhyas and Himalayas,

the waves of the Indian Sea.

They pray for the blessing and sing thy praise.

The saving of all people waits in the hand,

thou dispenser of India’s destiny,