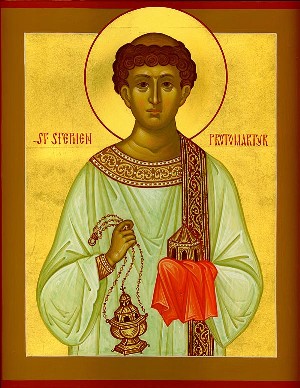 The Feast of St Stephen

Ever since the tenth century Stephen’s Day has been associated with horses, probably because the season was a time of horse sacrifice in pagan northern Europe and a time of rest from agricultural work for both man and beast. In England it is a time to bleed horses to ensure their health for the coming year. In the sixteenth century Tusser noted:

For many a purpose

it dooth him much good:

The day of St. Steeven,

old fathers did use.

If that do mislike thee,

some other day chuse.

Across Europe December 26 is a time for horses to be fed extra food, raced, decorated, blessed by the priest or ridden in ceremonies honouring their species. This is particulalry true in Sweden where “Staffan Riders” would race from village to village and sing songs in honour of the saint. Some have tried (not very successfully) to explain the connection between horses and St Stephen’s Day by claiming it has stemmed from confusion between the martyr in the Book of Acts and a later saint, Stephen of Corvey, martyred c. 1075, whose feast day June 2. This Stephen was a lover of horses and was said to ride five of them in turn. When he was murdered his unbroken colt took him home to Norrtalje which became a shrine for horse-healing.

St Stephen’s Day is also marked in Ireland and other parts of Britain by hunting a bird considered protected every other the day of the year, the wren, and parading about with its body. Wren Boys used to carry a dead wren on a branch from house to house, and sing an appropriate song which solicited money:

On St. Stephen’s day was caught in the furze;

Though is body is small, his family is great,

So, if you please, your honour, give us a treat.

On Christmas Day I turned a spit;

I burned my finger; I feel it yet,

Up with the kettle, and down with the pan:

Give us some money to bury the wren.