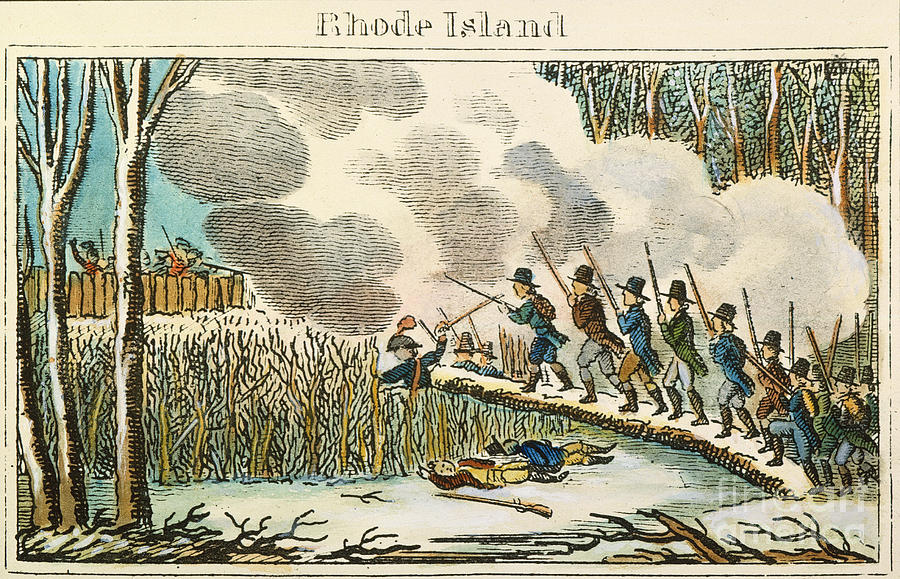 It was inevitable that the arrival of European colonists on the shores of North America would result in warfare. Though relations between natives and colonists could be peaceful and local treaties made, the expansive nature of European settlement would assuredly pit the peoples against each other in violence.

In 1675, a vicious conflict known as King Philip’s War was raging in New England. King Philip was the English name given Metacomet, the chief of the Pokanoket tribe, who had built a coalition of various native tribes, who began attacking settlements in Connecticut and Massachusetts. The war would prove the deadliest threat ever faced by colonies on the eastern seaboard. Twelve towns would be over-run by the tribesmen and a tenth of the male population killed in battle.

Though the Narragansett tribe had declared themselves neutral and retreated to a fort in the middle of a swamp near Kingston, Rhode Island, their warriors had attacked a nearby colonial garrison, killing at least 15 people. On December 19th, a colonial army and its native allies attacked the over 1,000 Narragansetts at the fort. Over 300 were killed  and over 150 militia men were killed or wounded. The Great Swamp Battle was a crucial turning point in the war. Before too long the chief of the Narragansetts and King Philip himself had been killed. The war lasted until 1678, after which tribal threats to the colonies severely diminished.